1 in 4 Employees Admit to Experiencing Suicidal Thoughts at Work

Ahead of World Mental Health Day on 10th October, R;pple Suicide Prevention is executing a vital awareness-raising campaign to address the troubling lack of legislation around mental health and suicide in the workplace.

With new research by R;pple finding that 1 in 4 employees have experienced suicidal thoughts at work, R;pple is campaigning for change – calling on legislators and workplaces to make suicide prevention mandatory and entrenched into their existing health & safety policies.

Whilst fire drills and marshals are common practice for workplaces, and Fire Action signs having been a legal requirement since 2007, the UK, unlike many other countries, does not monitor, investigate, regulate, or legally recognise work-related suicides – with a person 62 times more likely to die from suicide (1 in 88) than in a fire (1 in 5,447).

The latest findings from R;pple also show that over a fifth (21%) of employees do not feel comfortable enough to talk to their employer about possible struggles with mental health. R;pple is therefore calling on businesses to become more accountable and put as much energy into suicide prevention as they do their fire escapes.

Since its launch on World Suicide Prevention Day (10th September) 2021, R;pple has had over 850,000 downloads and intercepted over 3,300 suicide-related searches – whilst saving at least 24 lives. The software is installed as a browser extension or embedded into Wi-Fi networks to ‘intercept’ harmful searches relating to suicide or self-harm, by instead providing resources for people to seek free, accessible 24/7 mental health support.

R;pple ambassador, Aaron Willis, star of BBC’s The Apprentice and founder of Vulcan Security, commented: “Mental health in the workplace is a momentous issue and should be a priority for businesses across the country. Not only is it a health risk to individuals, but it’s having an impact on the business also, with poor mental health cited as a factor that impacts productivity for 1 in 5 employees, contributing to costly levels of presenteeism”.

Many of the UK’s biggest businesses and universities have already introduced the crisis intervention tool across their networks, including QBE Insurance, RPC Law, Manchester Airport Group, Dorset Council, Lockton Insurance and Bassetlaw CCG – plus the Universities of Portsmouth, Leicester, Wolverhampton, Aston and many more.

Installing R;pple across desktops is one of many small steps that businesses can take to stand-up to suicide in the workplace and protect their employees from the torment of mental health.

Launched in September 2021, R;pple is an interceptive tool designed to present a visual prompt when a person searches for harmful keywords or phrases relating to the topic of self-harm or suicide. These phrases include any words or terminology which have been identified as displaying potentially damaging online content.

Discretely intercepting harmful searches and providing signposting to 24/7, free mental health support at a time when you are most vulnerable.

R;pple does not track, monitor or capture any personally identifiable information and instead simply intercepts any searches relating to the topic of self-harm and suicide in a non-intrusive manner whilst respecting the user’s privacy as a priority. 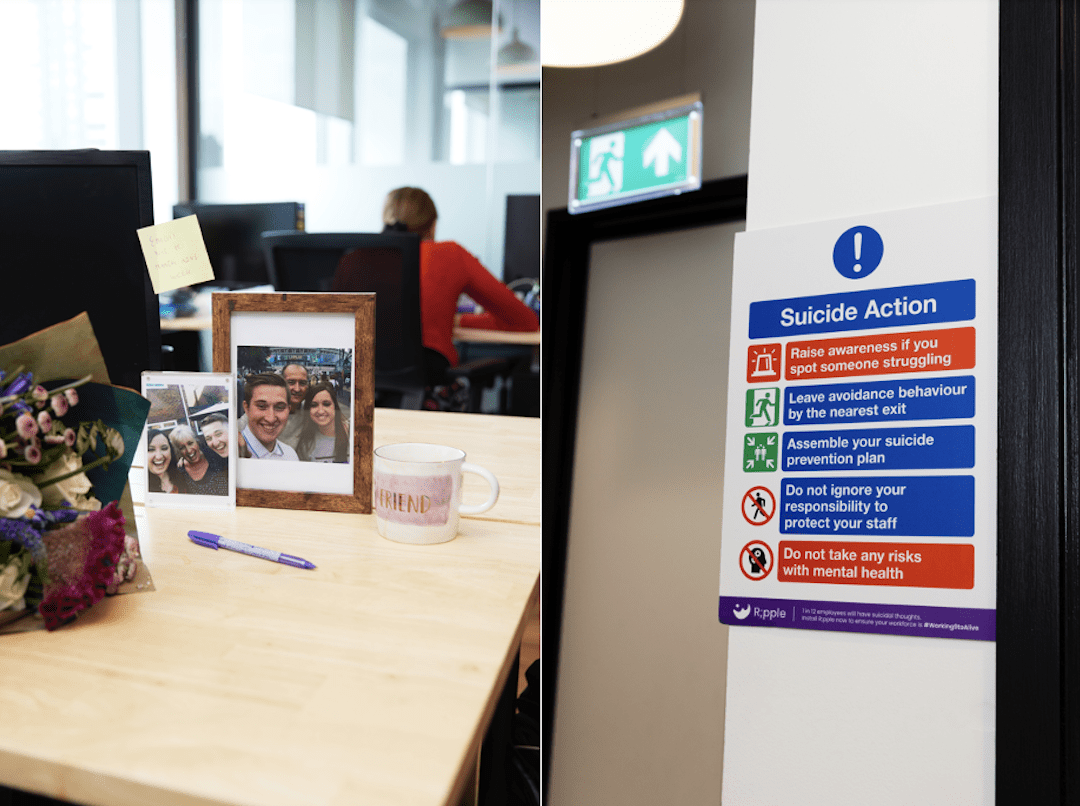 1 in 4 Employees Admit to Experiencing Suicidal Thoughts at Work