Gas Safety is a Key Consideration for any Refrigeration Application

Detection of ammonia can be a demanding and complicated task – but IGD was able to offer a solution that fits with their client’s present infrastructure. They provided training on the process of design, commissioning, installation, and ongoing maintenance so that the M&E partner can administer a turnkey gas detection solution. Some of the project’s challenges and solutions IGD faced are outlined in this article.

Typically, refrigeration necessitates the use of refrigerant fluid, and many standard refrigerants – such as propane, carbon dioxide, and ammonia – are dangerous gases at room temperature. For example, where propane is extremely flammable, carbon dioxide and ammonia are both toxic.2,3,4 Therefore, to ensure the safety of personnel in industrial refrigeration applications, dependable gas detectors are vital to safeguard against any leaks.

IGD was approached by one of their M&E partners who had received a request to place a gas detection system at a food refrigeration facility belonging to an international transportation company. The facility, located in Liverpool, is comprised of multiple warehouse-sized chillers and freezers which are employed for the storage of food prior to transportation.

Ordinarily, facilities with industrial refrigeration will follow the European Standard guidelines established in EN 378.5 However, in this instance, the transport company held concerns regarding occupational exposure, subsequent to reports of the smell of gas onsite. To adequately address employee safety concerns (and ensure COSHH safe exposure regulations such as EH40 were met), the client set upon installing gas detectors in the areas where onsite personnel worked.6

The refrigerant gas present onsite is ammonia (NH3): an invisible gas with an acrid smell. Ammonia is frequently used as a refrigerant for numerous reasons, including first-rate heat-absorption properties and its compatibility with smaller-diameter pipes.7 Despite that, ammonia is an irritant and can lead to serious health problems in high concentrations or over long periods of exposure.

Although specific rules are not in place, where the use of ammonia in industrial refrigeration facilities in the UK is concerned (it’s addressed in various Health and Safety at Work regulations), questions over employee wellbeing signified that the client wanted to install a sturdy detection system to guarantee levels of ammonia remained within safe limits.4

The Challenges of Low-Temperature Ammonia Detection

Detecting ammonia at low temperatures can present unique challenges. Ammonia can degrade or “consume” current electrochemical gas detectors.8,9 Over long periods of time smaller, background levels of ammonia can severely impact the sensors which can induce a loss of sensitivity. 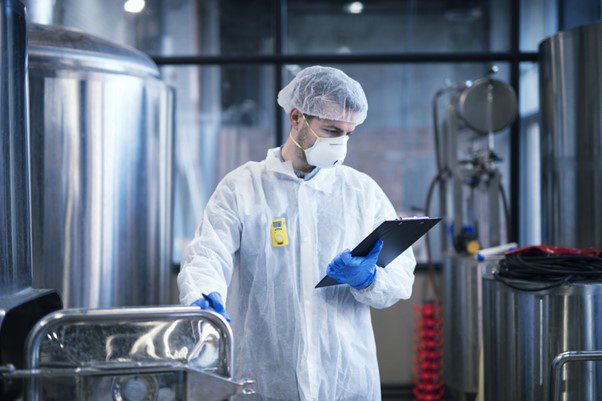 This could lead to a potential disaster if a compromised sensor allows a major ammonia leak to go undetected. In most cases, optical sensors are favored for ammonia detection as they don’t experience the same degradation.

However, in this instance, there are application issues to consider: particularly, low temperatures. Numerous electrochemical sensors are only rated to -20 C, and optical sensors suffer at these temperatures due to condensation and icing issues.

IGD developed a solution when met with the difficulties of measuring ammonia at low temperatures, establishing and distributing our line of long-life ammonia sensors based on ionic technology.

This technology is non-consumptive, enabling the sensors to function effectively over long periods without degradation even where there is a continuous presence of ammonia. The technology doesn’t require water in its electrolyte, allowing for a reliably accurate operation down to -40 C. In this specific case, IGD possessed a technological edge over the competition.

Typically, in refrigeration applications, the preference is to install gas detectors around the valve stations, as gas tends to leak and amass in this area. However, in this facility, the innovation was that valve stations were positioned outside. Alternatively, IGD recommended gas detectors to be installed near to the entrances and exits of the chillers and freezers – thus, levels of ammonia amassing in these areas were most personnel were working could be sufficiently monitored.

Using IGD’s advanced addressable 2-wire technology, the M&E partners installed gas sensors. This offers a significant advantage over standard addressable systems or 4-20 mA systems in that less wiring is required. In this instance, the ability to use a 2-wire configuration provided savings on installation time of up to 70%.

Industries Where You Need A Benzene Gas Detector

What Is A Sewer Gas Detector?

Are You Using A VOC Gas Sensor To Monitor Effluent?

How Do We Monitor VOCs And Why Do We Use VOC Detectors?