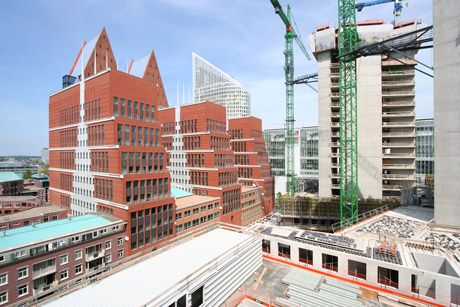 The safety bar is set high for building sites in the Netherlands.

Auditors and mystery visitors tested sites using the Conscious Builders’ code to see how the code of conduct is implemented.

In the past four years, 868 construction sites using the Conscious Builders code have been visited and tested by auditors and mystery visitors to see how the code of conduct is implemented. Director of Conscious Builders, Ilya Werkhoven, said: "We challenge sites to improve permanently. What was new in 2013 and scored highly sometimes becomes the norm by 2015. In the construction industry developments go fast. We regularly see innovative ways of working at the construction site. Unfortunately, we also see construction sites where it is still a mess and not reaching the standards. There is still much to achieve.”

Enhance the building In the reports Conscious Builders received from the sites visited was found one local resident’s complaint of a site, who said: "I can explain it now as no different than contempt for rules and local residents." Unfortunately, this is the experience of many local residents and passers-by and as such is what contractors need to work on. No doubt there is more frustration in the area that is not pronounced or reported.

Werkhoven said: "The time when you could go to work and only have to look inside your building fences is far behind us. As a construction company, you must be a good neighbour to also be able to work in the future residential area. More and more sites are now using the Conscious Builders’ code. That's not always easy. The bar is high to perform well. We also see that new affiliates have to get used to it first. Construction sites have become increasingly common and are often more compact so the challenge is greater. Werkhoven added: "The figures show that communication and complaint handling has improved slightly in 2015. With the huge rise of social media, it is easier for builders to communicate with their environment.

Faster and less nuisance To succeed in creating a site layout, safety and environment remain the most profitable. Werkhoven said: "It must be ensured that not only those on the construction sites are safe, but also that the public and those in the wider environment are not negatively impacted. We are all against blind entrances and exits, traffic diversions and a forest of signs.”

The code of conduct evolves and strengthens continuously, take the use of radios as an example. Five years ago radios were almost standard on construction sites, but now a blaring radio at the construction site is enough to lose the license. Werkhoven said: “That was five years ago, so we already see an improvement. Nowadays, we see construction materials and hubs where people are gathered so that the logistics movements are limited causing inconvenience to vans and trucks on the road. What will conscious building look like in five years? I expect the process will be quicker and quieter.”

New code Werkhoven said: “On 23 June, Conscious Builders launched its New Conscious Builders conduct during the National Environment Management Day. From July 1, the new code of conduct applies to all connected sites. The basis of the code remains the same: a Conscious Builder is the calling card of the building and takes into account the environment and humans. The shape is modified to give even clearer handles on the construction site. Working with the Code encourages reducing the nuisance and performing operations optimally in the area.”

📢 Our monthly HSI newsletter arrived this week, check it out now!

This months sponsor was @GFGGasDetection.