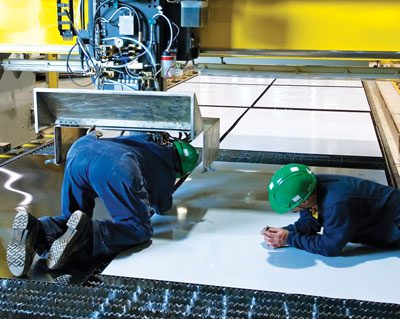 New materials in safety footwear have currently become more popular; toecaps made of plastic, for example, or penetration resistant inserts made of composite materials. It has, however, been found that the safety features of these new materials are not necessarily equal to those established by conventional ones. Although they have been tested by using harmonised standards and meet the essential basic safety requirements of Directive 89/686/EEC, as amended (Personal Protective Equipment), they can function in unexpected ways in certain circumstances. Ten widely used kinds of footwear fitted with different safety components were tested at the Finnish Institute of Occupational Health. Materials and methods Ten adequate EC type examined safety footwear were selected and the manufacturers or importers supplied them for testing. The footwear was fitted with polymeric, aluminium and steel toecaps. The penetration resistant inserts were both steel and composite materials. The test items are listed in Table 1. Slip resistance, impact and compression resistance of toecaps and penetration force and dimensions of penetration resistant inserts were tested. The measurements were carried out in accordance with standards EN ISO 13287 and EN ISO 20344 with certain modifications. Due to a presumption that all the footwear meets the requirements of standard EN ISO 20345 some of tests were carried out harder than usual, for finding differences between materials in real use.

Slip resistance of heel was tested by two methods which are described in EN ISO 13287: • On ceramic tile floor with sodiumlaurylsulphate solution (NaLS). NaLS is a common agent in detergents where it is reducing a surface tension. NaLS solution is like soap solution • On steel floor with glycerine. Glycerine is corresponding grease or oil In CE type examination footwear shall meet at least one of the previous mentioned requirements.

Impact resistance of toecaps was tested by dropping a mass of 20 kg from a one metre height to the forepart of the footwear. The striker was fitted with steel wedge. The clearance under the toecaps was measured after impact.

Compression resistance of toecaps was tested by compressing the fore part of the shoe between two metal plates to the force of 15 kN, which corresponds to approximately 1,500 kg. The clearance under the toecaps was measured after test. In addition to testing to this standard method, the compressing was increased to 20 kN, where possible.

Penetration force was tested according to standard EN ISO 20344 except the test nail was changed. The test nail which is defined in the standard differs from a real nail. The diameter of the test nail is 4.5 mm and the shape of the tip is a truncated cone. Because this nail is not sharp, composite materials can withstand it better. Due to this reason the test was carried out by using usual sharp nail (diameter: 3.1 mm). Four points of a pair of footwear were punctured: two in the ball area, one in waist area and one in heel region. The lowest and highest values were reported. The unprotected edge area in the forepart and heel part of the sole was also measured. In addition, one pair of usual safety footwear with mono density polyurethane outsole but without a penetration resistant insert was tested as a reference item.

Although the number of the test items was not large, the results were quite revealing. Some results were expected but there were also some surprises. Due to the fact that slipping is a significant type of serious accident, it was excellent that all the footwear passed the slip resistance test. At least one requirement fulfilled. This did not mean that the footwear would be slip resistant in all the environmental conditions, however; on icy surfaces, for example. Because the footwear was aimed for summer or indoor use, the slip resistance in winter conditions was not tested. Metallic toecaps were stronger than polymeric ones, as expected. The impact resistance was not problematic, although one polymeric toecap failed a little. In contrast, the compression resistance test was a disappointment. One pair of steel toecaps surprisingly failed in this test. It shows that the material itself is not necessarily the sole reason for good protection, but that the adequate construction of footwear is also important. It seems that especially where it comes to compression resistance, polymeric toecaps are not very good, and it has been proposed previously that the sideward compression resistance of non-metallic toecaps should be also tested. In workplaces where there is a heavy traffic of forklifts, for example, the use of safety footwear with non-metallic toecaps is not recommended. The penetration resistance with the usual nail was a hard test for composite inserts. None of the composite inserts met the requirements of the standard, although the best results were quite close to the limit value. The forces of composite inserts are much higher than the force of basic safety footwear without inserts. It can be presumed, however, that thinner nails penetrate the inserts with less force due to the textile construction of composite. EN ISO 20344 and EN ISO 20345 were revised at the end 2011 and the testing method was changed to be harder. According to the new standards, the test nail (shape is not changed) is punctured to the force of 1,100 N and the tip of the nail should not penetrate the insert when checking visually. The change of the testing method demands that the manufacturers improve their products and it seems that this has happened. For the present time, however, it is not recommended to wear safety footwear with composite inserts in construction work, or in comparable workplaces where there are thin, sharp objects. Due to the manufacturing reasons steel inserts cannot cover the whole area of the sole of footwear and they do not give complete protection. Usually composite inserts cover the whole sole and they are act as insoles, too. Although all the results were not satisfactory, this test showed that safety footwear is adequate and it is always better than everyday footwear in dangerous environments. The original results have been published in Finnish magazine TM Rakennusmaailma which also planned this testing. This magazine is specialised in testing different methods and components in the construction industry, including Personal Protective Equipment.