Expectations of protection and performance

Austin Simmons, head of SATRA’s safety product test centre, explains helmet safety and his organisation’s capabilities to test to the most stringent standards.

Safety helmets are worn in a variety of industrial, sports and leisure activities. Industrial applications, include workers on construction sites and in the fire service. Common sporting activities include horse riding, rock climbing, canoeing as well as helmets being worn on vulnerable types of transport such as cycles and motorcycles.

Helmets that provide any form of protection require ‘CE’ marking if they are supplied into Europe and are covered by the requirements of European Directive 89/686/EEC the Personal Protective equipment (PPE) Directive (with the exception of motorcycle helmets which are covered by specific road transport regulations).

The PPE Directive details procedures to be followed by the manufacturer to demonstrate compliance. The procedures vary, depending on the type of hazard that the PPE is intended to provide protection against and the Directive splits PPE into one of three categories: ‘simple’, ‘intermediate’ and ‘complex’. Helmets mainly fall in the ‘intermediate’ category, but fire-fighters helmets are categorised as ‘complex’ PPE.

A ‘Notified Body’ such as SATRA Technology Centre in the UK must assess an example of all protective helmets before the CE mark can be attached. This process is known as EC type examination and includes checks on design, performance, and recommended use.

If products are satisfactory then a certificate is issued indicating compliance with the Directive. ‘Complex’ products are also subject to ongoing conformity checks on subsequent production by the Notified Body.

Obviously, wearing appropriate safety helmets cannot stop accidents happening, but can help prevent some injuries and reduce the severity of others.

While good design has an influence on helmet performance, increased impact protection, for instance, is generally achieved by increasing the strength of the outer shell and shock- absorbing properties of the inner lining.

Technology limitations generally mean making materials thicker or denser to achieve this, so increasing the size and weight of the helmet. This in turn affects the ergonomic attributes of the product, which can make people reluctant to wear it or introduce additional hazards such as neck-related injuries. So in reality, protective helmets are generally a compromise between protection and ergonomics.

Generally, head protection is intended to guard the wearer in two main ways. Helmets are designed to resist the effect of being hit by a falling or thrown object. They are also intended to protect the wearer from head injury when taking part in activities such as cycling, horse riding and mountaineering where sudden dynamic contact with the ground or some other hard object is likely.

Most types of helmet are constructed with a hard outer shell and inner polystyrene type liner and these provide the primary impact protection. The hard outer shell is intended to prevent penetration of the skull and major distortion and also helps reduce transmitted forces through the helmet. The liner is intended to act as a shock absorber further reducing transmitted forces through to the head.

A number of factors influence helmet performance. Energy from any impact is absorbed by the helmet, which therefore reduces the force of the blow to the head. While achieving this, the helmet may be weakened or damaged and this may not always be visible, especially in the case of thermoplastic materials.

While the outer shell is often cracked on impact, other helmets appear visually satisfactory after test. However, the outer shell has been deflected inwards momentarily and compressed the polystyrene lining, which does not recover its original shape. The helmet is permanently weakened; this cannot be seen without removing the lining which is often glued in place. Protective headwear should be replaced if subjected to a serious impact.

The extent of the protective area is another factor to be considered when choosing a helmet. Helmets designed for specific sports will have different coverage areas and, for this reason, products should only be used as detailed in the user instructions. The fit of the helmet is also crucial to its performance and it is generally recommended to be comfortable but close fitting. Restraints, where fitted, should be securely fastened and the chinstrap should be sufficiently tight to be under tension at all times. Regardless of application, most helmets incorporate a three-point fixing system and tests have been developed to test the efficiency of this arrangement.

A number of tests have been devised that assess the performance of the helmet under a variety of situations and environmental conditions.

The method of establishing impact protection performance depends on the application. All tests are dynamic and involve either the helmet falling from a height onto a hard surface or a heavy object descending onto a helmet mounted below. Penetration tests using pointed objects are also often included. Accelerometers and load cells are used to measure the effects of impact.

Whatever the method, impact tests involve the use of special rigid head forms manufactured generally from wood or aluminium and conforming to the requirements of various standards. These head forms are available in a range of sizes, and relate to the inside circumference of helmets, enabling different sized helmets to be tested. The head forms also incorporate chin and neck areas for testing the retention mechanisms of helmets.

Accelerometers and load cells are used to measure the effects of impact. Impact attenuation is measured using accelerometers. Triaxial or uniaxial accelerometers capable of measuring and recording accelerations in the order of thousands of g are mounted at the centre of gravity in the head form.

The helmet and head form are sat in a cradle or ‘toilet seat’ and the assembly is dropped in a guided free fall using either a wire or rail guided apparatus onto an anvil fixed to a rigid base. The cradle ensures the helmet meets the anvil at the designated angle, without interfering with the dynamic reaction. Tests are repeated at different points on the helmet Peak accelerations should not exceed 250 @ 300g, depending on the standard requirement. Impact anvils are shaped to suit the hazard being protected against such as kerbstones.

Helmets designed to protect against falling objects are generally tested using load cells. EN 960 head forms, for example, are mounted onto a load cell, which in turn is attached to a large mass of concrete or steel.

A helmet is mounted onto the head form in the manner in which it would be worn by a person and adjusted to ensure a minimal gap between the inside of the helmet and the outside of the head form. The assembly is positioned directly below a weighted guided wire striker that is allowed to fall from a height calculated to provide a specified impact energy in Joules. The resulting transmitted force should be in the region 5 @ 15 kN as detailed in individual standards.

Certain types of helmets incorporate ventilation holes or slots and these can be tested to ensure that sharp objects cannot cause injury. The helmet is mounted in such a way as to enable a pointed striker to impact directly onto the ventilation area. An electrical connection between the metal striker and head form indicates whether contact has been made.

Thermoplastic materials may exhibit different impact properties at extremes of temperature or after exposure to sunlight. Tests are also carried out, therefore, on helmets that have been subjected to:

Retention of the helmet on the wearer’s head in an accident situation is particularly important and a number of tests examine this aspect of performance. The helmet is fitted to a head form and the retention system fastened as in use. A downward force is suddenly applied to the retention system via a 10kg mass, and any resulting peak and residual displacements noted. This includes buckle slippage.

The effectiveness of the retention system is also checked using a ‘roll off’ test. The helmet is attached to a head form in the normal manner of use. A 10kg load is applied in front of the peak via a wire attached to the rear edge of the helmet. The load is applied suddenly and any rotation noted. ?

SATRA is one of Europe’s foremost European Notified Bodies for certifying protective helmets, and it is able to carry out testing and EC type examination work using established European standards or in house developed test specifications. 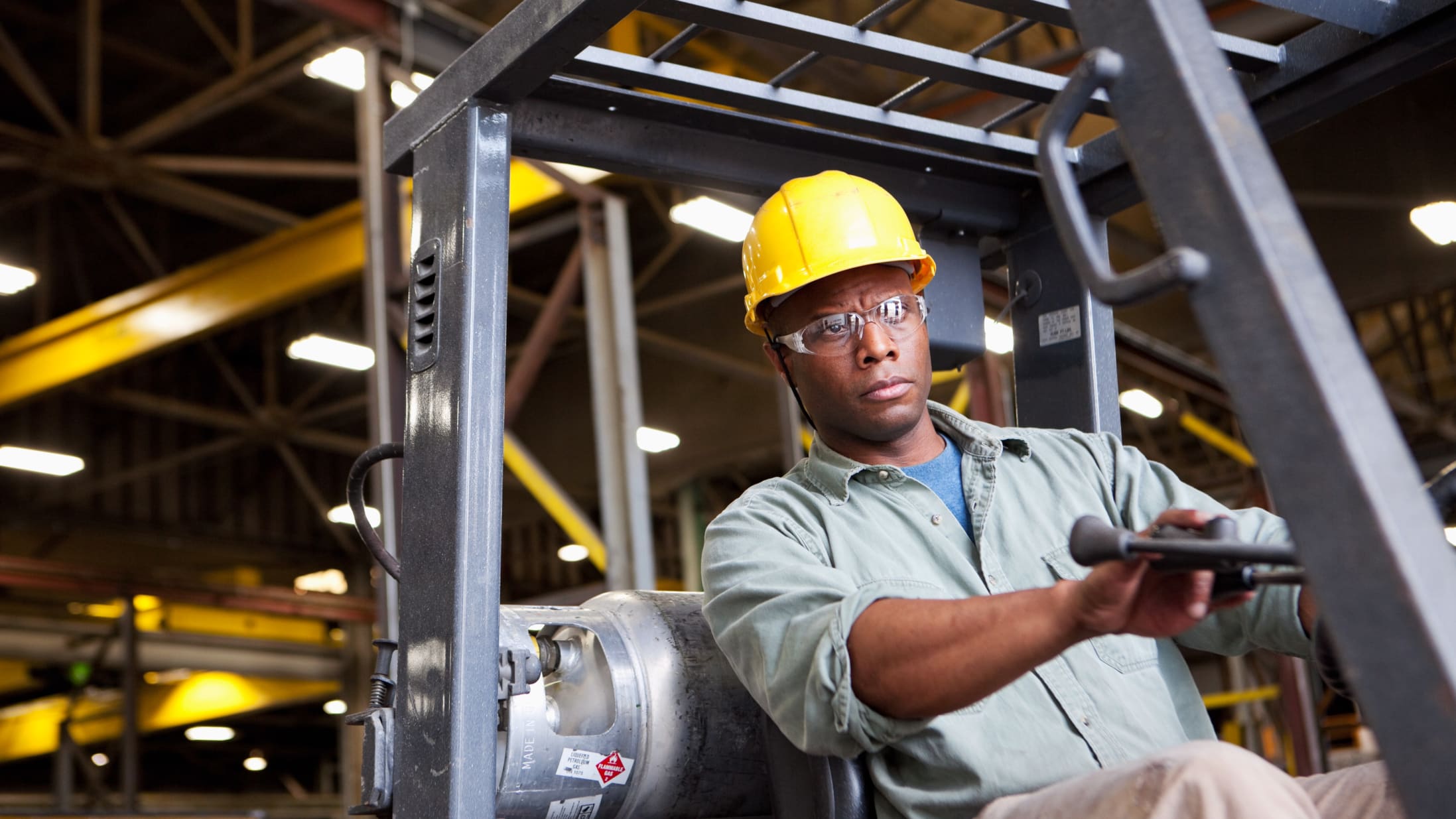 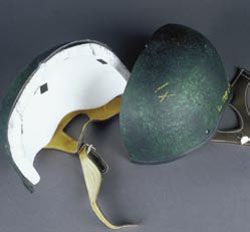 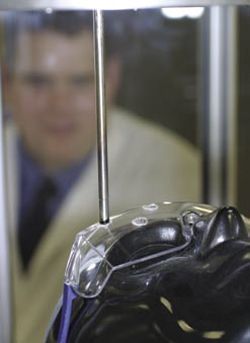