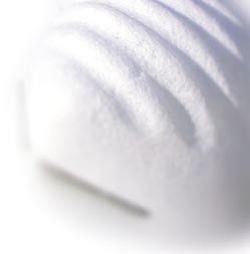 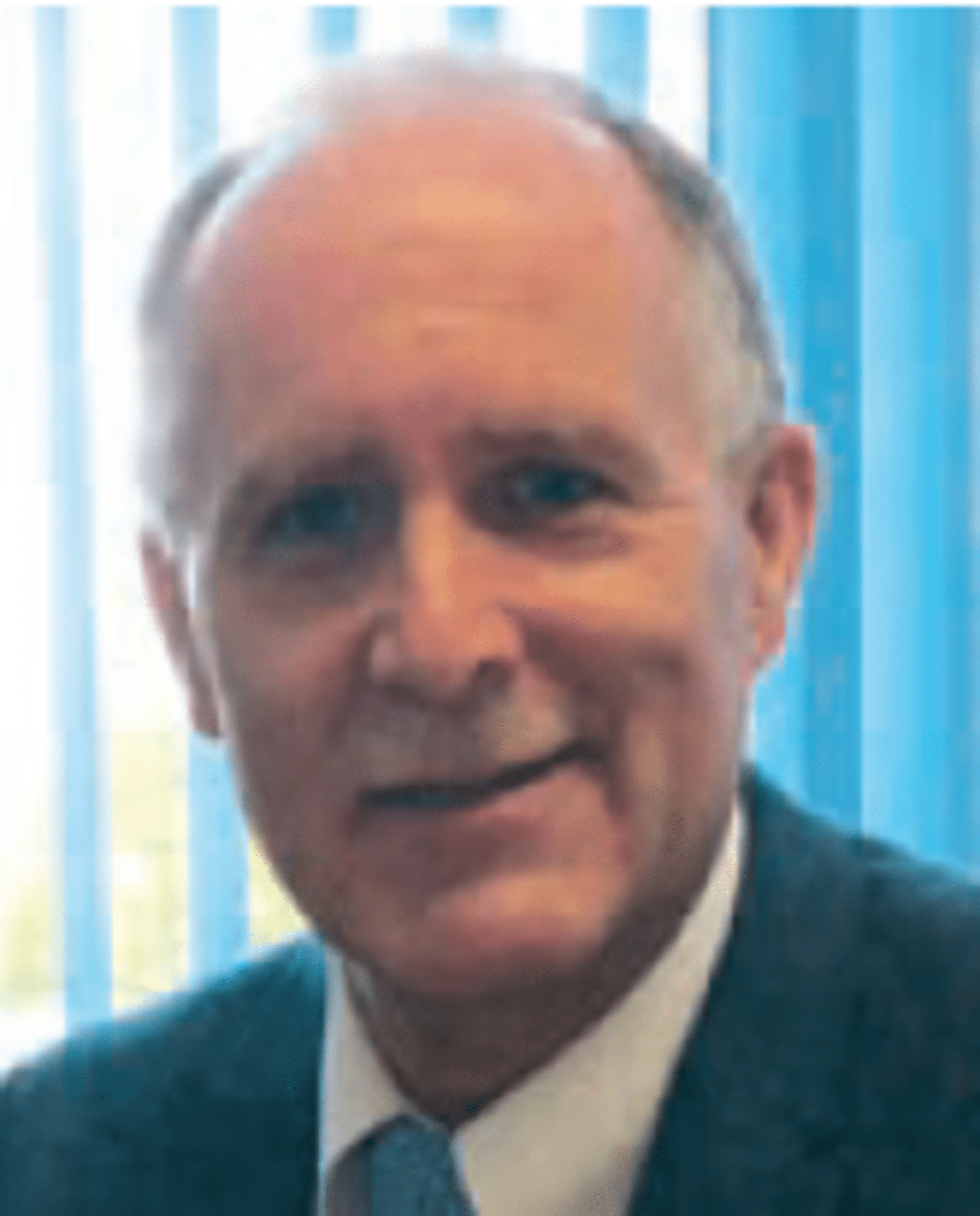 Changes in Europe within the field of respiratory protection against solid and liquid particles.

European Directive 89/686 EEC, published in 1986, requires all Personal Protective Equipment (PPE) to be tested and EC-marked prior to placement on the market. Essential Safety Requirements stipulated in the Directive are verified by Notified Bodies (NB), based on European Harmonised Standards, when these are available. Dedicated to improving working conditions, French national health and safety research institute INRS has been notified since 1990 for testing and certifying PPE, such as Respiratory Protective Devices (RPDs), ear or eye protectors, with respect to the directive.

A failure over time…

INRS has delivered EC certificates for many RPDs including all particle-filtering devices by applying test methods laid down in the relevant standards. However, whilst testing and certifying devices with the aim of improving the level of protection provided by them, INRS goes beyond laboratory testing limits by checking whether expected device performance characteristics are maintained during usage. One reason for this is the unsatisfactory results of a research study into the efficiency of filtering face pieces or particle filters; results that reveal major differences between the theoretical (nominal) protection factor (1) determined in the laboratory and the corresponding factor measured at the workplace (2).

One of the several reasons, which may explain this difference, may be performance of the filter material used in device design. Filter material performance has a direct impact on the protection factor and it is therefore important that it is maintained throughout the foreseeable equipment usage time. This point is clearly made in Article 3.10.1 of ANNEX II of the above directive, which states, “The constituent materials and other components of these PPE classes must be so chosen or designed and incorporated as to ensure appropriate user respiration and respiratory hygiene for the period of wear concerned under the foreseeable conditions of use”.

Researchers therefore decided to study the consequences of extending the testing time beyond the 3 minutes required for assessing particle filtration efficiency (3) of devices classed at 3 levels (P1, P2, P3) according to standards EN 143, EN 149, EN 405 and EN 1827. Testing was therefore gradually extended to a theoretical particle load of 120 mg, to see whether a performance change harmful to the end-user appears during usage. The results were conclusive, especially when testing filter devices incorporating electret material.

A respiratory protective device in conformity, yes but…Whilst “mechanical” filters suffer no particular adverse effects because of subsequent clogging, this is not the case for a number of so-called “electrostatic effect” devices meeting the requirements of the above standards, which reveal impaired performance over time. This can sometimes lead to their declassification and this has also been observed in relation to both solid and liquid particle filtration. The latter particles in fact produce the most significant penetration effect (figures 3 & 4).

This means that a high efficiency-classed (e.g. P3) device can change class to become an average or low efficiency (P2 or P1) device during its service life. Under these circumstances, the real protection factor will no longer correspond to the protection factor determined by laboratory testing. Besides the fact that the observed performance of different devices on site will be inferior to the laboratory-measured performance, this decrease may have a considerable impact on the health of users.

For a revision of testing methods…

INRS believes that the European testing procedure for assessing particle filtration performance of filter devices is inadequate both for ensuring that the protection level expected by the end-user will be maintained throughout his task performance period and for selecting the most suitable protection devices. Through the European Technical Committee for RPD standardisation, INRS has called for a change in the testing methods included in the relevant standards. Unfortunately, other members, who argue that the INRS observations require confirmation prior to normative revision, have not taken this request into account. A working group has been set up to tackle the problem and the results of its work essentially confirm the INRS observations, but these results have again been left aside because of research initiated at ISO level.

Is it acceptable to use protective equipment, which does not offer a constant degree of protection thoughout the working day?

From a health and safety angle, INRS has clearly answered “No” to this question. In the September 2003 issue of the “Travail et Sécurité” review, INRS warned both users and public authorities of the risk associated with using RPD filtering against solid and liquid particles mainly through “electret materials”.

The French authorities subsequently issued a recommendation to manufacturers, importers, retailers and users not to commercialise on the French market or use devices, which have not been assessed according to an exposure test defined by INRS. This recommendation referred to all types of filter devices because the end- user is only concerned with performance of the device and not of the materials used therein, when deciding on the device most suitable to his requirement.

The French authorities also initiated a “Formal Objection” procedure at European Community level and launched market surveillance. The Formal Objection has been taken into account by the EC and the CEN has been asked to create a work item for amending all European Standards concerned with particle filtration.

Starting with EN143 amendment, a working group has undertaken additional round robin tests to confirm the INRS observations. This work has revealed both performance loss and good inter-laboratory reproducibility. It has therefore become obvious that testing methods must take into account time-related performance change and that this will produce more reliable device classification.

In 2005, the French authorities decided to undertake market surveillance on a widest possible technical basis, to check whether products commercialised on the French market currently comply with the new recommendation. More than 70 different products were selected and additionally seized at customs. For the time being, no final conclusion has been reached, but it is certain that some devices (filters or filtering face pieces) do not comply with the requirements for their quoted class, in the light of exposure tests. Full results will be known within the coming months and will be communicated by the French authorities.

What are the EN143 proposed amendments?

Proposed amendments apply to all filter types, irrespective of the material use (“electret” or “mechanical”) and are as follows:

Amendment of other standards

All the other particle filtration standards will be amended by the middle of this year. Equipment specification will be considered with reference to the EN143 amendment on exposure testing and storage of reusable devices.

Advantages for the end-user

This process represents a major change for filtration devices, but a small change for the end-user. He will continue to select the most suitable device, but will now be assured that the protection level provided by the selected device will remain at least constant throughout its service life, as long as it is correctly fitted and worn.

Clear “R” or “NR” marking will tell the end-user whether he should or should not use the filtration device. This will be helpful, for example when using an EN405-type half-mask, in which the particle filter can be incorporated in a combined filter and used up to the end of the gas stage life or be interchangeable at the end of the day.

The type of filtering material will no longer be a matter of doubt or difficulty when designing a filtration device.

(2) “Workplace protection factor” (EN529): The ratio between the breathing zone ambient concentration (outside the face piece) of a chosen hazardous substance and its concentration inside the face piece (suitable sampler being placed as near as possible to the mouth of respiratory protective device wearer) of a correctly functioning respiratory protective device when correctly worn and used.

(3) Filtration efficiency (of a filter or a filtering face piece) The difference between 100% of the test aerosol concentration and the penetration going through a sample in test, expressed in %.

(4) Penetration (through a filter or a filtering face piece) The percentile of the test aerosol concentration going through a sample in test, expressed in %.

Bob Wells has been working in the product certification field for over 25 years. He started out at BSI as a laboratory test engineer and later became a manager testing mechanical products prior to their certification. In 2010, he returned to BSI and has been looking after the certification of personal safety equipment since then. He is passionate about ensuring products have been tested to the highest level, that a product will perform as expected and protect people, property and the environment and that it will do what it is designed to do. 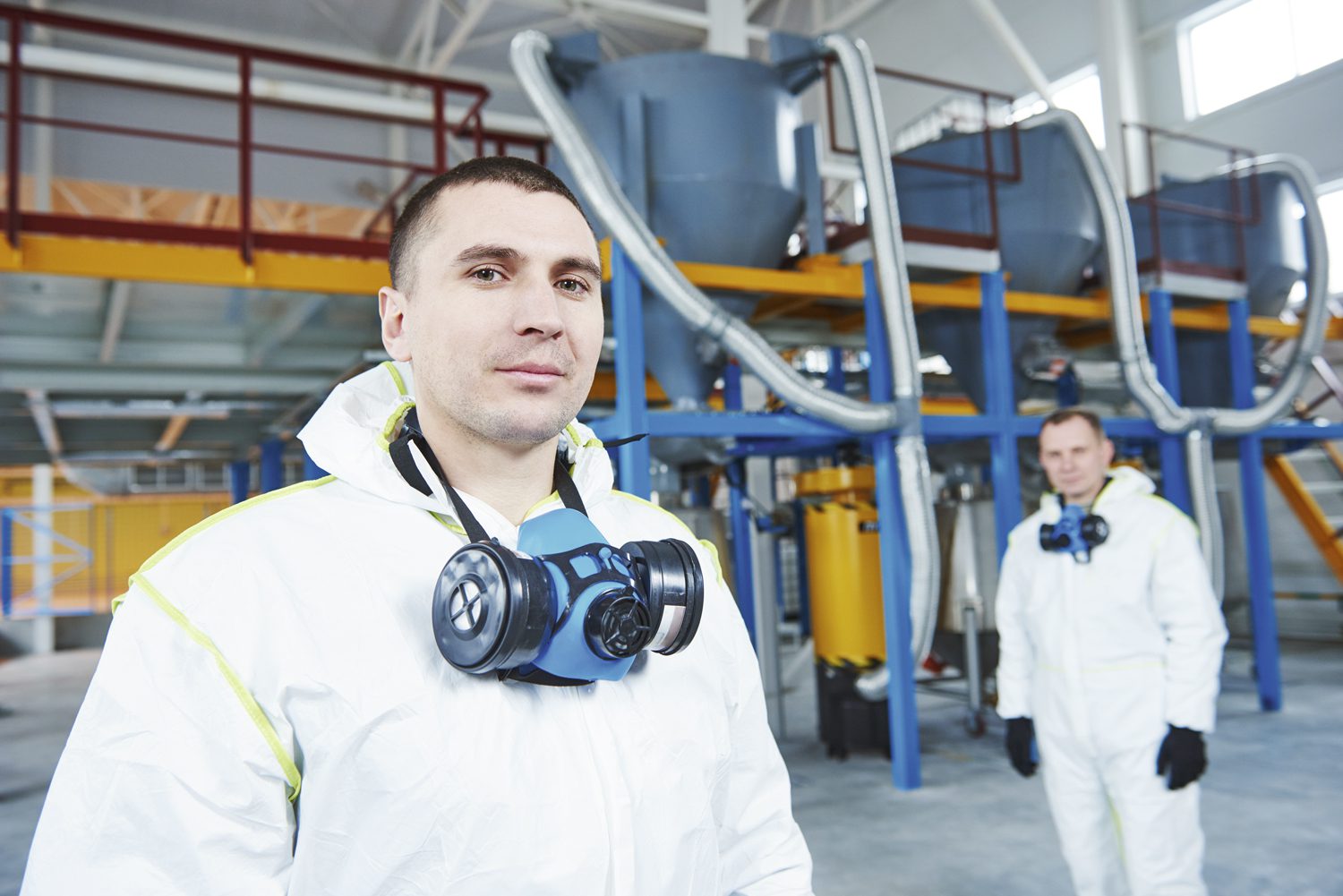 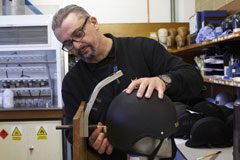 Protecting Above the Neck