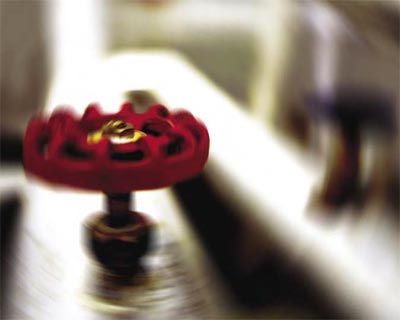 By R.K. Wharton and D.H. Pickering

Part 1 of this paper1 considered the ranking of body clothing employed as personal protective equipment (PPE) for explosives workers, when evaluated using a moving manikin. The apparatus, explosives sources used and calculation method were all the same in the present study, which examines the performance of a range of protective headwear.

The head of the moving manikin occupies 6% of the 88% portion of the body surface that is sensored. The un-instrumented hands and feet account for the remaining 12%.

Apart from the event sensor, which is located above the head, the head itself contains seven sensors. These are located in the right side of the chin, the left check, both eyes and the mouth, and in the centre and nape of the neck. The sensor density for the head (1.2 sensors per percent body area) was similar to that for the rest of the body (where the equivalent figure was 1.4). If data from these sensors were presented conventionally as a portion of the total body surface of the manikin that is sensored, this would distort the head burn injuries since the head only represents a small proportion of the surface area of the manikin.

The results were therefore processed to calculate the burns as a percentage of the head area alone. This enabled a direct comparison to be made of the effectiveness of the range of head protection outlined in Tables 1 and 2 against the threats posed by different burning explosives.

The results obtained for tests using the firearm propellant, flare composition and star composition are presented in Tables 3, 4 and 5, respectively. As with the body clothing evaluation 1 , results are given for the different degrees of burn injury and also for the percentage of the surface of the head receiving burns of second degree and above.

The results for firearm propellant in Table 3 indicate that significant injury (3rd degree burns) to the head will occur for all the systems evaluated. Such injuries could well be fatal indicating that better protection, or engineering controls, would be required when working with 5 kg quantities of such materials.

The results for flare and star compositions in Tables 4 and 5, respectively, present a similar degree of burn injury, again indicating that improved protection is required to that provided by just a hood or a visor.

For short duration events, the burn map data indicate that only the front of the head contributes to the burn injury. This is true in most, but not all, of the trials. Examples of situations where front and back head injuries are roughly equivalent are the exposure of clothing systems D and E to fireballs produced by 5kg of star composition, which has the highest surface emissive power of the non-MTV materials used. In these cases, the duration of the burning process is long enough for the rear of the head to be severely irradiated after the manikin has completed the turning sequence.

The burn injury results in Tables 3-5 are significant since they clearly show that head protection can be the weakest link in a clothing ensemble. However good the protection offered by body clothing, this is only one element of protecting explosives workers and if the protection available for the head is inadequate, serious or fatal injuries could still result. This has been recognised by House 2 who has concluded that burn injury to the head is always the limiting factor even if anti-flash hoods are worn with Royal Navy protective clothing combinations 3 .

Our results highlight the value of full clothing ensemble testing since the performance of the PPE system will only be as good as its weakest component. Squire and Staples 4 have previously reported that the weakest points of certain ensembles are the exposure of the head and hands. This substantiates the results reported in this paper for the head and provides a strong justification for further development of the manikin to enable it to be used for evaluating the performance of anti-flash gloves and related products. Similar conclusions have been reached by House and Squire 5 for the evaluation of anti-flash protection for the Royal Navy.

When considering hand protection for explosives workers, however, the potential loss in dexterity when wearing gloves will also need to be considered.

Table 6 presents the relative rankings of the headwear evaluated in this study on exposure to three different fireball sources. It is clear that, as a result of the extent of burn injuries to the head, the data are not able to discriminate effectively between the performance of many of the head protection systems. Since, in the majority of cases, all the burns are to the front of the head, the rankings are based on the responses from a limited number of heat flux sensors and this will influence the accuracy of any predications. Nevertheless, it is possible to conclude that Headwear C offers the best protection against the thermal threats used in this study.

Information on the performance of headwear protection intended for use with MTV composition is much more limited since, from Table 2, only systems H and I were evaluated. The average percentages of the head receiving burn injuries for these two methods of protection are given in Table 7 but there are insufficient data to discriminate between them. It is noted that in neither case, contrary to the headwear systems previously considered, were there any third degree burns. This is because, even though MTV produces intense radiation, the quantity employed in the tests was relatively low (390 g) resulting in the incident energies received at the event-monitoring sensor in the head being less than any of the other trials.

This study has highlighted the importance of adequate head protection against the threat from burning explosives and indicated that this aspect can be the weakest link in PPE ensembles.

Further work is needed to identify appropriate protection for the head since none of the hood and visor systems evaluated against burning propellant or pyrotechnics offered adequate protection.

Although hand protection has not been evaluated in our work, this is recognised to be important and there is a need to develop the manikin further by providing it with hands having fingers and heat sensors so that full ensemble testing can be undertaken.

3 J. R. House, An assessment of the fire resistant properties of in-service and prototype clothing conducted on a “Thermoman” manikin, Institute of Naval Medicine, 1995, report no. 95042.

5 J. R. House and J. Squire, Anti-flash protection for Royal Navy personnel. The risk of burn injury to the head and hands from explosions, fuel fires or backdraughts and the effectiveness of the in service hood and gloves, Institute of Naval Medicine, 1997, report no. 97038.