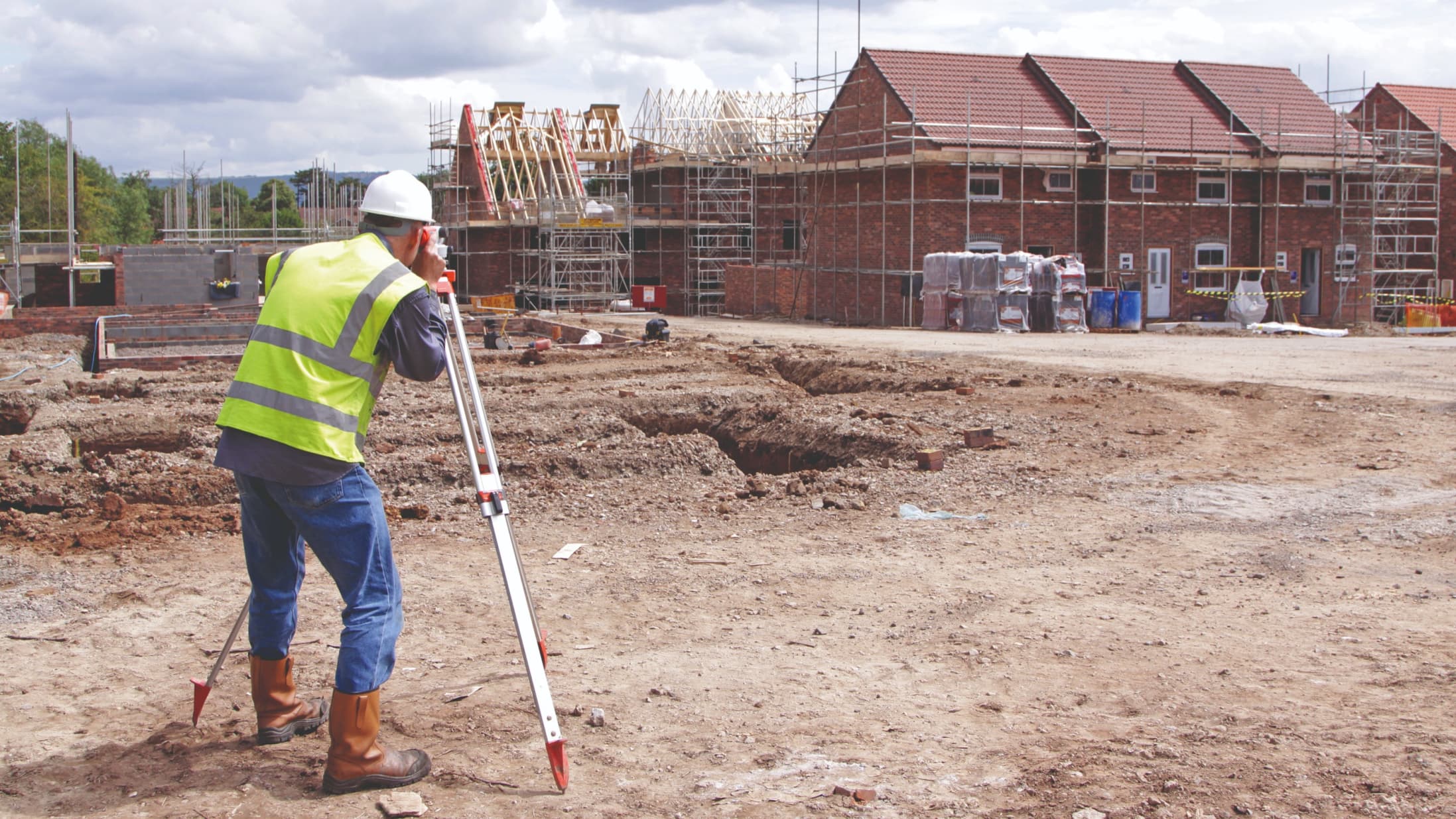 In Praise of Riggers 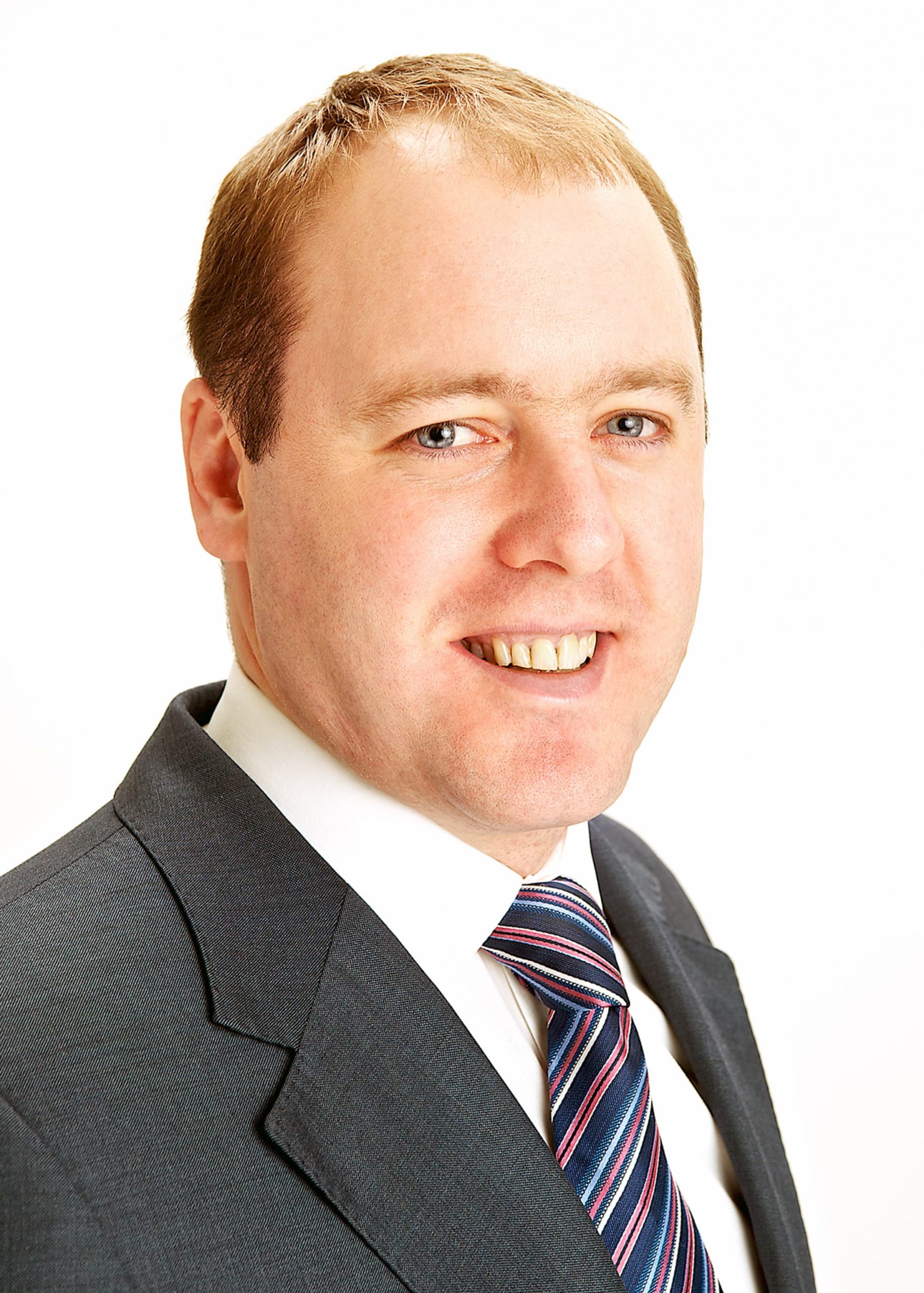 Rigger boots have a long history of use in the many industries involving engineering and construction, beginning with their use on offshore oil and gas rigs. Over time, however, their use in environments not entirely suited to rigger boots has been criticised. This white paper explains the most appropriate use for rigger boots as personal protective equipment.

A rigger boot is a particular type of pull-on safety boot. The name “rigger” comes from the fact that at one time, they were standard issue for workers on the offshore oil and gas rigs in the North Sea. These days they are worn by most types of worker as a general purpose work boot.

“Riggers” – as they are commonly nicknamed – are usually tan in colour, go approximately one third of the way up the leg, and feature a steel toe cap for safety. Other distinguishing features of the boots include pull-on loops around the top of the boot’s shaft and internal fur lining. They also tend to be loose fitting, facilitating the ease of pulling them on and off. 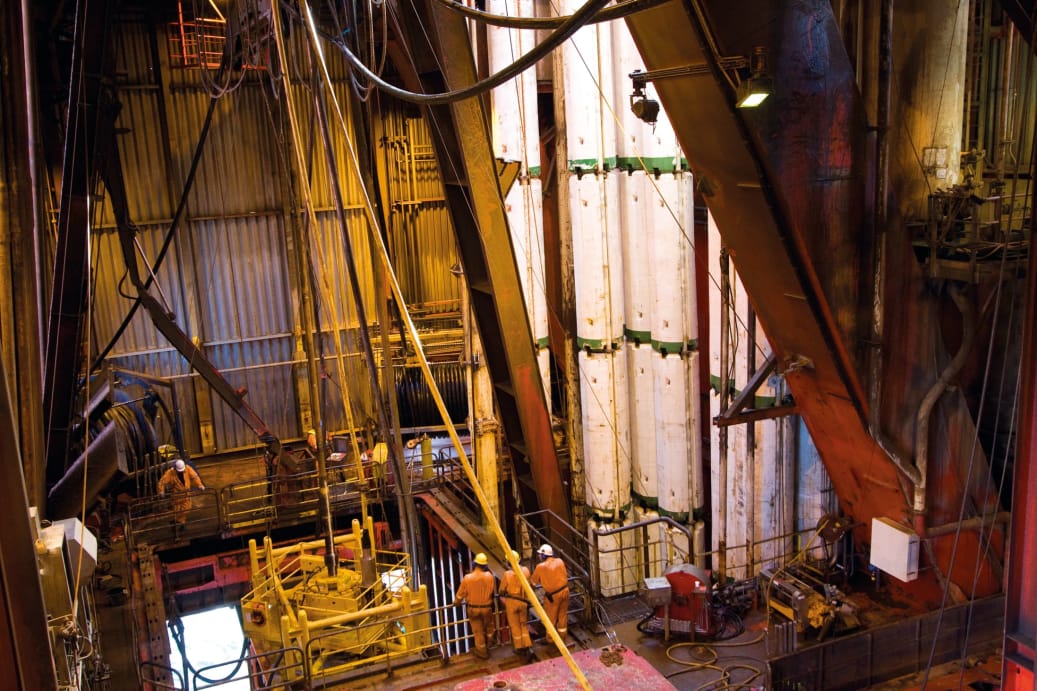 Anecdotally, Rigger boots have been criticised for their lack of ankle support and have been banned on some worksites. Fortunately, and as this article will detail, there are many solutions to this, including:

The assessment of appropriate footwear should always be made under the regulations that govern Personal Protective Equipment (PPE), [For a legislative Example:1]

“slips, trips and falls are the largest cause of accidents in all sectors”

“Slips, trips and falls are the largest cause of accidents in all sectors … the main causes of accidents that result in more than three day’s absence from work.” according to the European Agency for Safety and Health at Work. Slips, trips and falls (excluding falls from height) were the most common workplace accident type dealt with in Ireland by the Injuries Board in 2013, accounting for over one quarter (26.5%) of all awards for workplace accidents.

The Health and Safety Executive [UK/NI] guide states that PPE should “offer adequate protection for its intended use”.3 Therefore, the use of steel toecap boots (including Rigger boots) should be assessed against the conditions expected or found on the site. It is crucial that the safety footwear selected meets legal standards, is the correct type for the task/worker/environment and is used correctly by all staff wearing it. Several factors need to be considered, including: slip resistance, comfort, durability, and any other safety features required such as toe protection.

Slips, trips and falls are some of the most common workplace accidents. While no studies have been conclusive in showing that rigger boots can be directly at fault for an incident, it can be stated that the weakened ankle support associated with rigger boots could lead to a more serious injury. 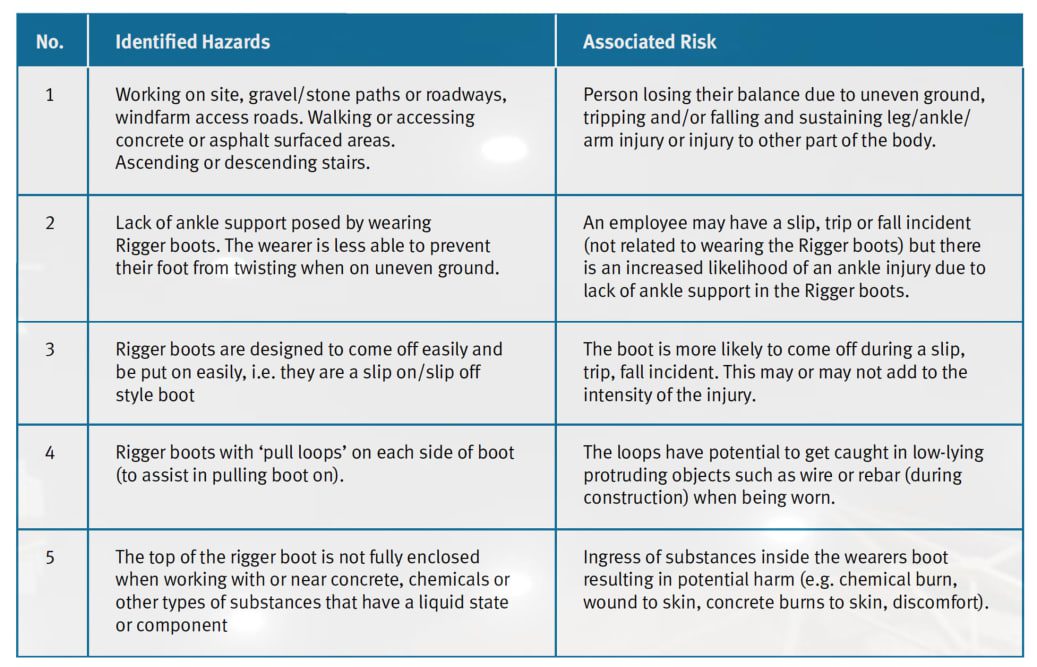 Below is a list of general hazards that have been identified in relation to wearing Rigger boots and their associated risks. Please note that this is not a risk assessment, but a guide to what the potential risks are with this type of footwear.

With comfort as a primary motivator, general industry workers began wearing the boots as well but, the most admirable characteristic the Rigger boot offered the general industry worker was affordability. If this worker actually garnered a shoe allowance from their employer it wasn’t very much – certainly not enough to subsidize a quality pair of lace up boots that could support the toes, sole, heel and ankle properly; let alone a boot that was waterproof, chemicalproof, shock resistant or slip resistant.

The primary benefit in addition to protection of the toes is that they can be put on and taken off easily, i.e. without the need for laces. Many tradespersons find that Rigger boots suit them as they offer greater protection than lace up safety boots would, for example, when working with concrete. Management and visiting personnel appreciate the ease and convenience of the Rigger boot when required to change from ‘shoe to safety footwear’ several times daily.

Criticism due to lack of ankle support

There is evidence that shows that many Irish and UK employers have adopted a prohibition on the wearing of Rigger boots on their work sites. The current legislation does not prohibit the wearing of Rigger boots. This basis for this ‘Blanket Ban’ would appear, from review of recent literature on the matter, be it due to the lack of ankle support provided by Rigger boots and the associated potential for increased risk of ankle injury in the case of a slip, trip or fall.

There are currently no regulations given by the HSE stating specific tolerances for ankle support. Some may argue that without specific written regulations, lace up shoes are not guaranteed to provide better support than the Rigger boot, thereby almost making them equal for similar jobs. Indeed, in certain industries the Rigger boot is considered more useful because of the quick and easy cleanup that it offers the user. For occupations where the user works atmosphere, this quickly rinsed safety shoe makes more sense than the lace up boots that have their laces taped to prevent contamination by a respiratory damaging substance.

There is currently no published research literature available to prove a correlation between the wearing of Rigger boots and the increased incidence of ankle injuries in the workplace. The textbox opposite shows the study that was carried out, which was not designed to assess the safety of Rigger boots. It was designed to compare Wellington boots and safety boots with an alternative form of footwear. 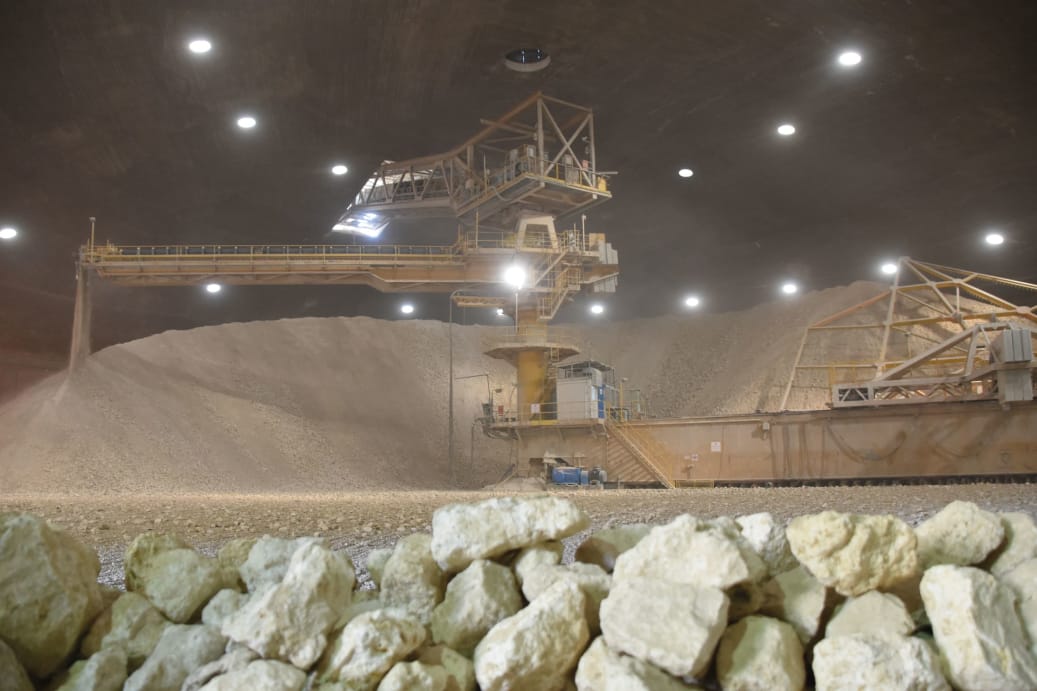 The Health and Safety Institute performed a case study which among other things compared the use of an alternative form of new footwear for Prosper De Mulder (PDM), an animal rendering company that employs 300 associates. The employees wear Wellingtons, safety boots and Riggers. The new alternative form of footwear replaced the Wellingtons and the safety boots, but no replacement was provided for the Riggers. The footwear was all prepared in a manner that was reproducible in the workplace. Tests used potable water as the containment. The operator testers walked in a half step manner on a ramp that increased its incline over a period of 12 repetitions. The test continued until the operator slipped, or felt unsafe in continuing. 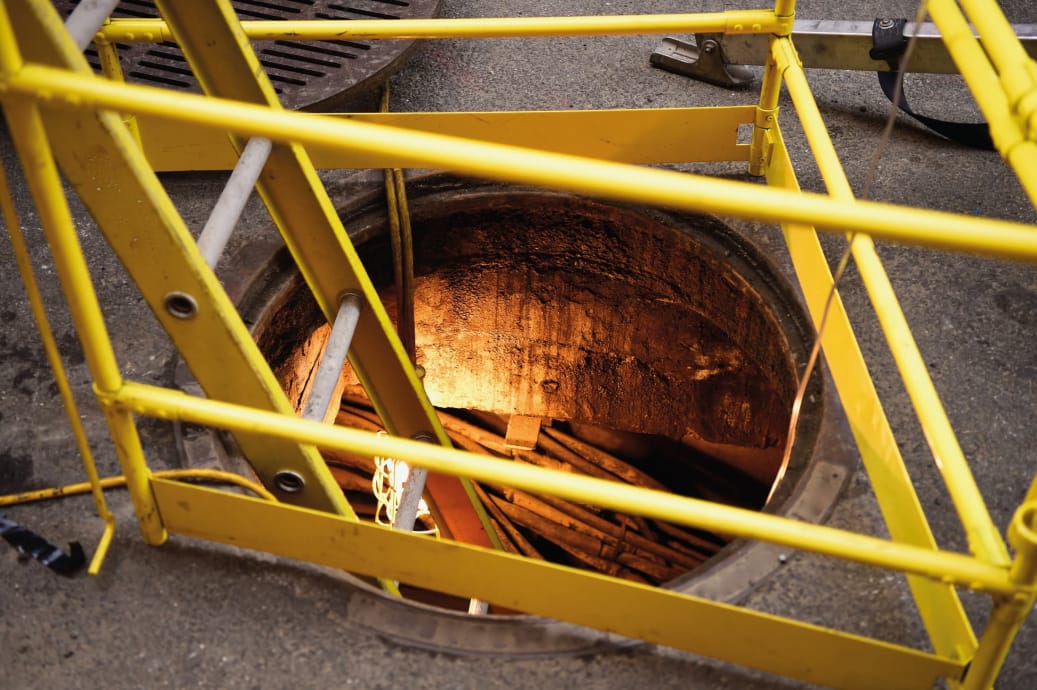 Gavin Coyle, founder and CEO of Coyle Group, has a deep personal investment in health and safety issues. He was motivated to pursue a career as a Safety professional after witnessing an onsite fatality while working on a large construction project aged just 18. At the heart of Coyle Group’s approach lies a first-hand understanding of the business-critical role that the human factor plays in ensuring the safety and sustainability of our clients’ operations.

Based in Ireland with a global reach, Coyle Group specialises in recruiting outstanding Health & Safety professionals on behalf of clients worldwide. We also provide clients with Safety consulting services.

Ultimately, we aim to act as our clients’ health and safety partner of choice in ensuring that their organisation has access to a reliable pipeline of high quality Safety professionals on a long-term or short-term basis. We also provide safety consultancy services. Everything we do is tailored to match the client’s project-specific requirements and budget expectations.

In Praise of Riggers 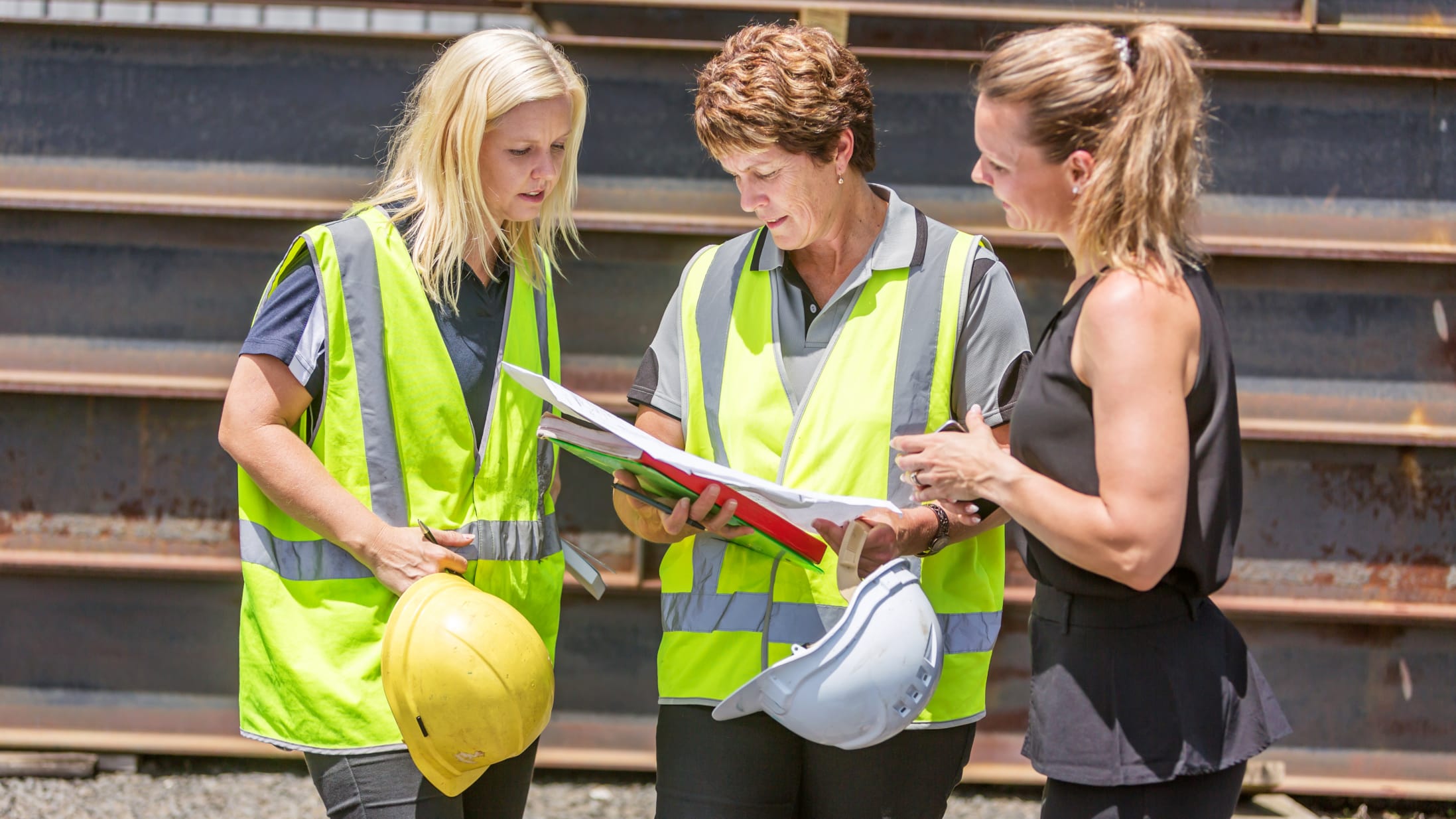