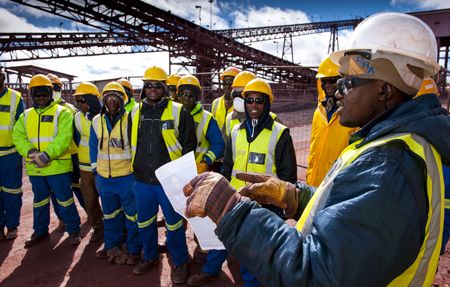 This year’s annual Global Safety Day at mining company Anglo American, held 7 October, focuses on the role that controls play to protect and keep us safe.

Like many businesses, mining is an industry that involves the management of hazards and risks.  Mining will always carry risk, but it is important to work towards a future that holds the possibility of no injuries or losses of life.

As part of its aim to raise awareness and change behaviours across the organisation, Anglo American holds an annual Global Safety Day, which this year focuses on the role that controls play to protect and keep us safe. Knowing the critical risks and the controls needed to prevent incidents from happening, or to reduce their consequences, is a key priority for safety improvement.

As well as thinking about controls as processes or systems, it’s also important to consider culture and behaviour. To ensure workers are protected it’s important that they are educated and engaged, which is why Anglo American invests significantly in analysing and addressing the ‘human factor’ in all safety situations.

Anglo American has a comprehensive ‘Learning from Incidents’ (LFI) process. Incidents are rigorously investigated to identify weak or absent controls so that the company can improve the effectiveness of its measures.

HFA is a tool that identifies lessons to learn from incidents by examining the human, behavioural and cultural factors that each play a role in an accident, so that appropriate action can be taken to prevent future incidents and ensure that every critical control is understood.

Yolande Muller, an Anglo American safety specialist in South Africa, said: “We shouldn’t focus only on systems and technological innovations, but also the behaviour, attitude and motivation of our employees. This isn’t a quick fix, however, as these sorts of changes take time and we need to positively change employee attitudes and behaviours one-by-one. We hope that through this holistic approach, we can sooner achieve our ambition of zero harm.”

The first step is to identify actions that lead to or motivate an accident. There are three different levels: workplace, organisational and personal.

Workplace examines the environment, the task itself and the level of engagement. It reveals the wider workplace context within which the incident occurred. Organisational focuses on corporate imperatives, decision making processes and links with leadership. It reveals the role that the organisational culture played. The personal level includes aspects such as an individual’s health, capability, fitness, and situational awareness, as well as team-related elements such as leadership, cohesion, dynamics, process and diversity. It provides a clearer picture of what was going on at the time for the people directly involved.

Once an HFA investigation has been completed, the business can make the appropriate changes to ensure that risks of this kind are avoided in future, by having the right controls are in place. These considerations can then inform the strategy and procedures of our business – from group level to mine management.

Author: René Aguilar, Group Head of Safety Management, Anglo American. People are Anglo American’s business, and the company’s first priority is to do everything it can to keep them safe and well.