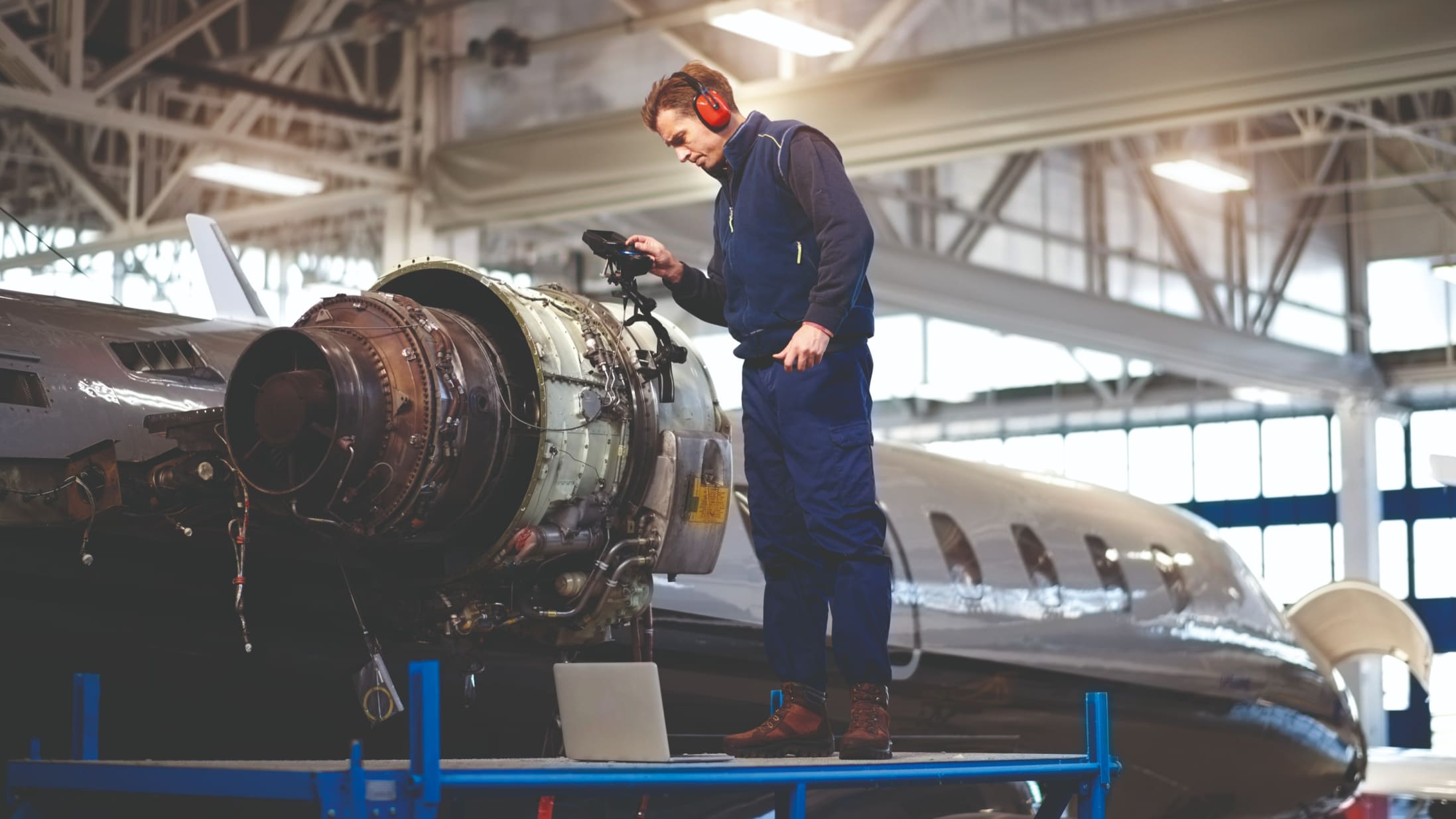 The type of work and the risks to which a person is exposed during their working hours makes it necessary to develop suitable Personal Protective Equipment (PPE). PPE must offer a variety of benefits to assure the correct protection and good health conditions for those using it.

One of the most important types of PPE is footwear. This must protect the foot from at least four hazardous situations: compression, impact, punctures and chemical products. However, there are also what we refer to as special risks, and these include electrical, mechanical and cutting with chainsaws.

According to the Spanish National Institute for Occupational Safety and Health (INSHT) the three types of footwear differentiated in an initial basic classification are: 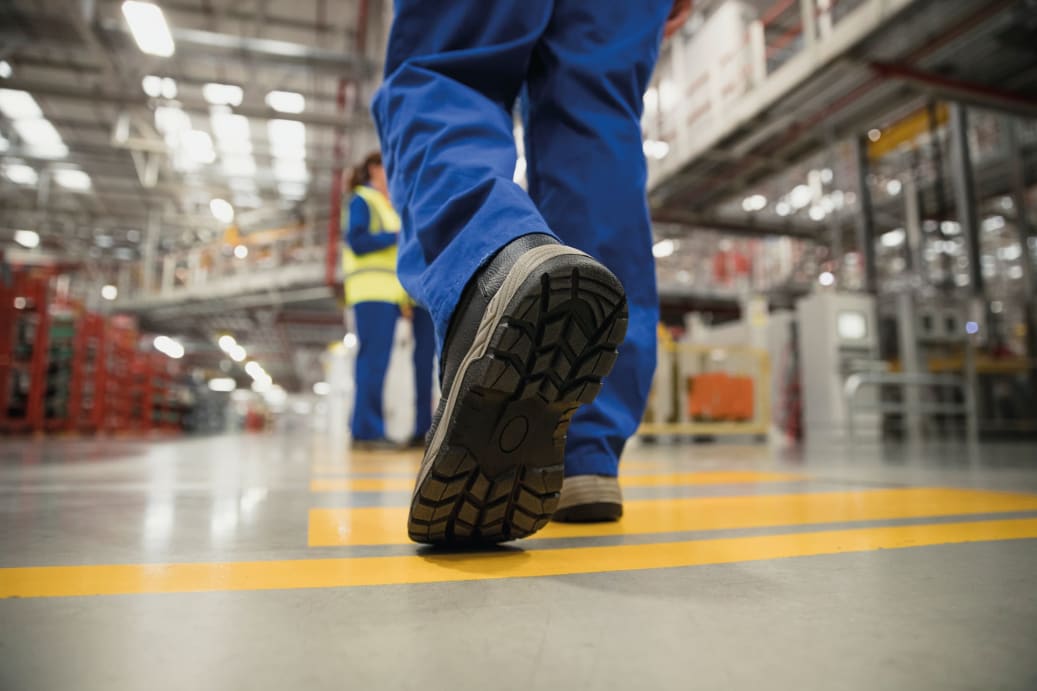 Depending on the manufacturing material, there are two categories:

Any of the three types, within these two possible categories, deliver a set of benefits that allow them to offer protection against several risks.

PPE and footwear must meet the requirements under the specific standards according to the type of work in which they are going to be used. For footwear, these include:

Moreover, most parts of the methodology to obtain the required values are shown in the Standard UNE-EN ISO 20344:2012 ‘Personal protective equipment – Test methods for footwear’, that explains the procedures to test the complete footwear as well as the individual components. In this article, some of the methods for whole footwear proposed in this standard will be detailed.

The standard UNE-EN ISO 20344:2012 lists until 17 test methods for complete footwear. These tests are usually carried out in the laboratory to control the quality and detect errors in the production systems.

The specific ergonomic features for footwear must be verified through using tests over three testers with different sizes. Testers must simulate typical tasks carried out during general use, such as walking, climbing and descending steps, and kneeling/ crouching down with a knee on the ground, to complete a questionnaire later. 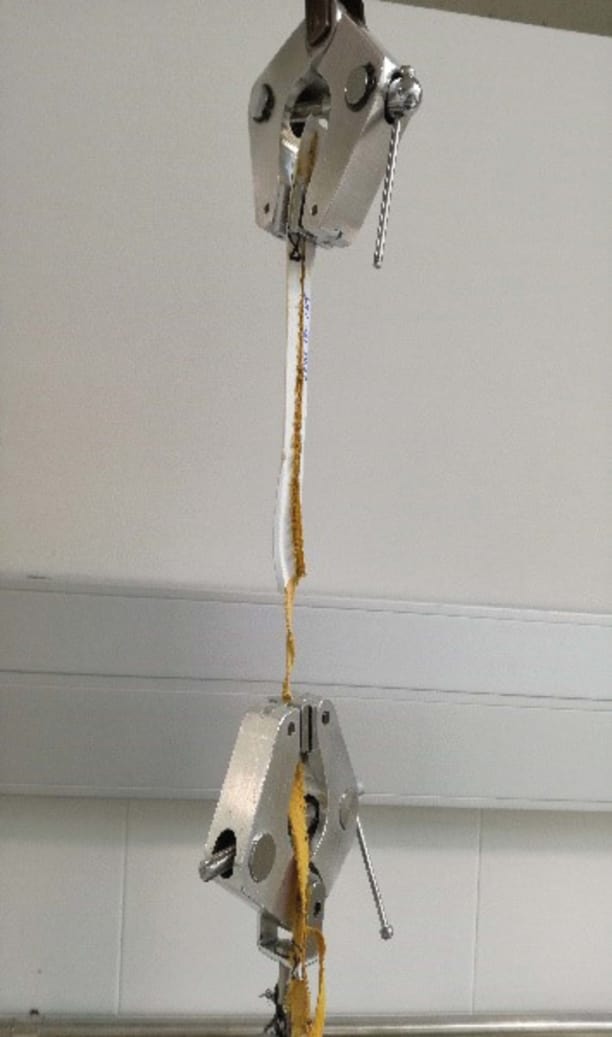 This test measures the strength required to separate the upper and outsole, as well as the layers of the sole, or to cause a tear on the upper or on the sole.

The aim is to assess the resistance of the pasting in the area located near the edge of the bond. In Figure 1, a test sample is shown during the test.

Figure 1: Test for the determination of the upper/outsole bond strength

This determines the internal length of the toecap, that is, its depth or usable space. 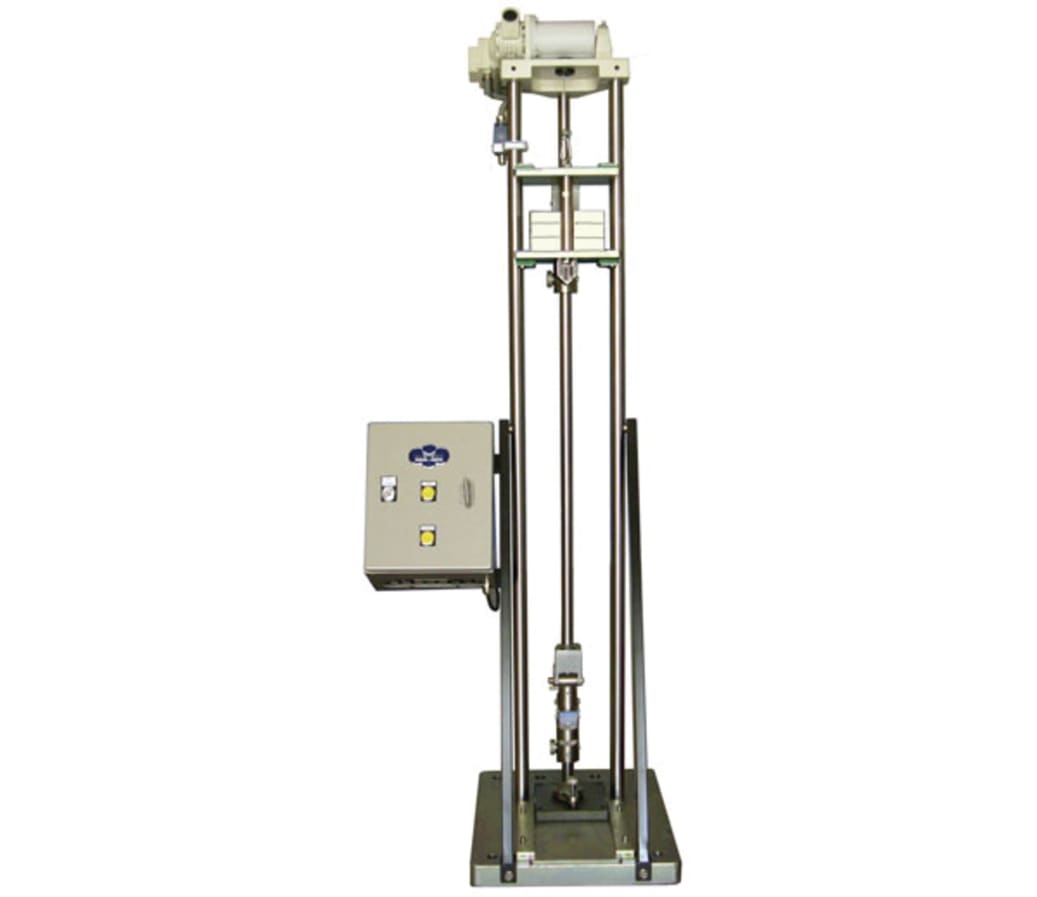 A piece of steel within the equipment shown in Figure 2 is dropped on the front part of the shoe. The drop height is the height required to obtain the needed impact energy, calculated as potential energy. The assessment is carried out through the free span inside the toecap at the moment of the impact, measured with a cylinder of modelling clay. The deformation is measured (final height) using a micrometre. 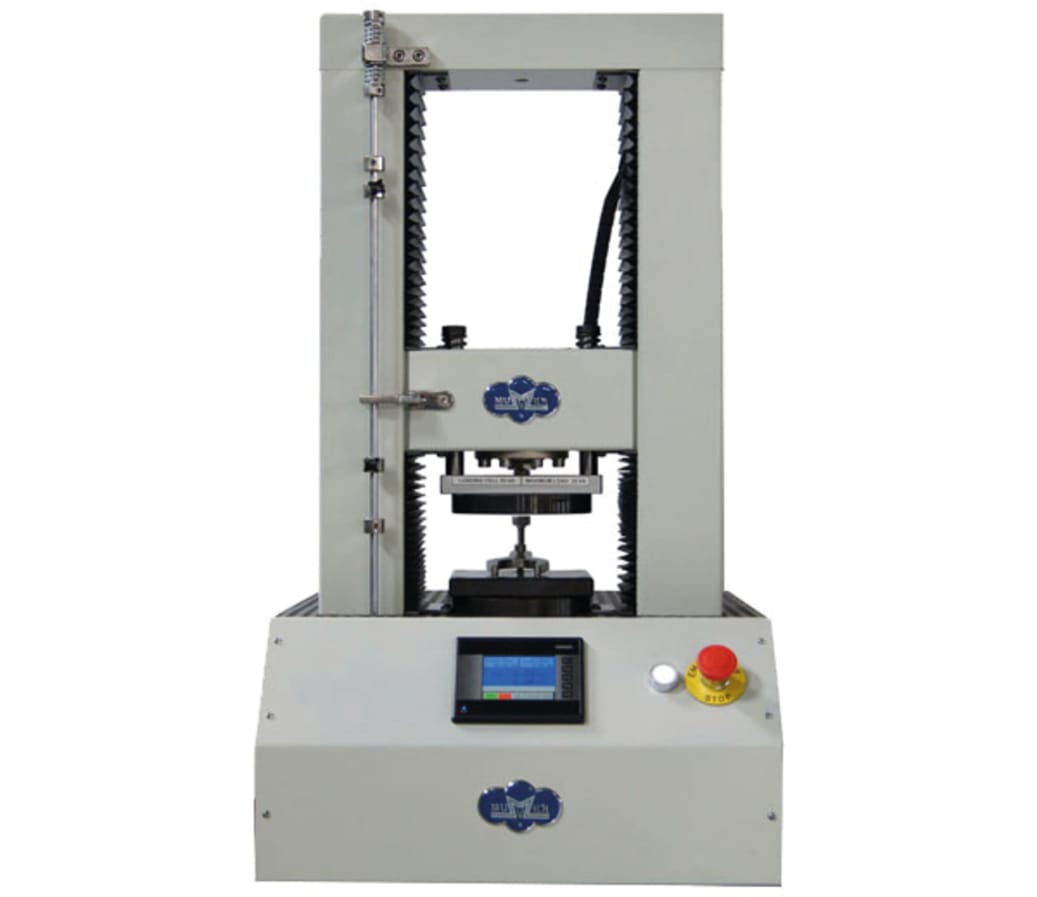 The front part of the footwear is compressed between the plates of a dynamometer (see Figure 3). To evaluate the compression resistance, the free span inside the toecap is measured when the dynamometer reaches the required compression strength, through a cylinder of modelling clay located in a similar way to the impact test.

Behaviour of toecaps and inserts (thermal and chemical) 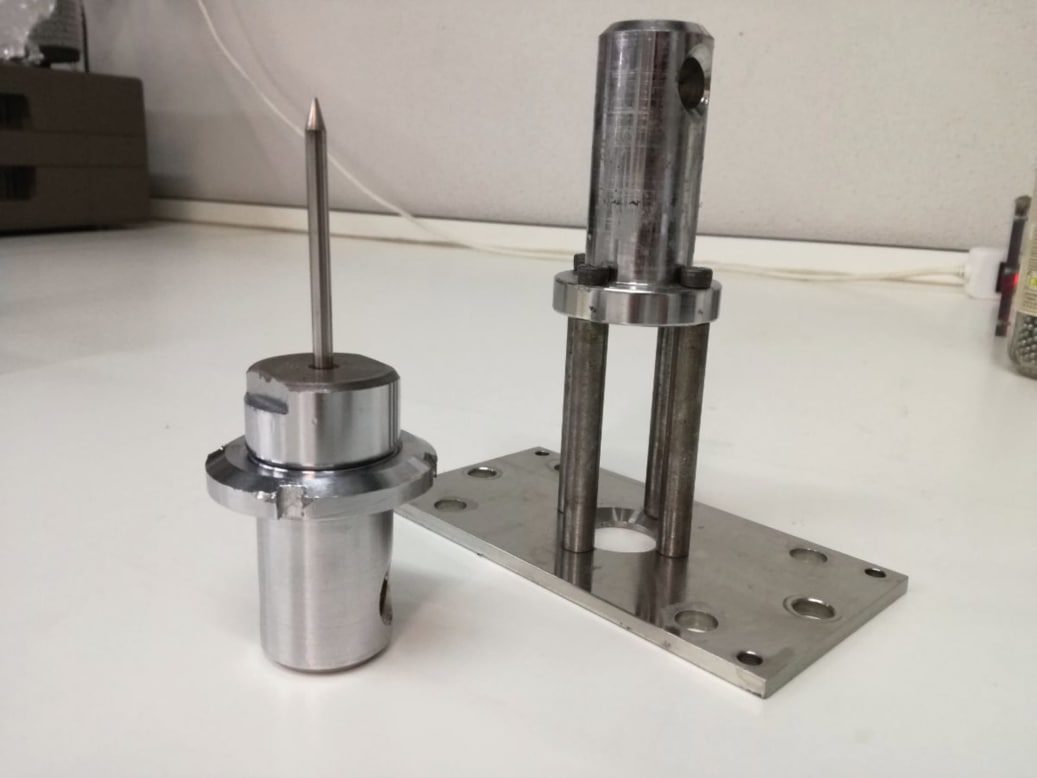 The location of the insert is checked in relation to the protective toecap and the last, as well as the presence of holes in the insert.

Figure 4: Tooling for the perforation test

In the case of footwear that includes metallic inserts, the resistance to penetration is defined as the maximum strength that must be applied to perforate the sole with a normalised punch (see Figure 4), pushing perpendicularly to the footstep surface.

In the case of footwear that includes non-metallic inserts, the resistance to penetration is defined as the fact that the perforation happens, or not, with the normalised punch and a strength of 1100 N, pushing perpendicularly to the footstep surface. 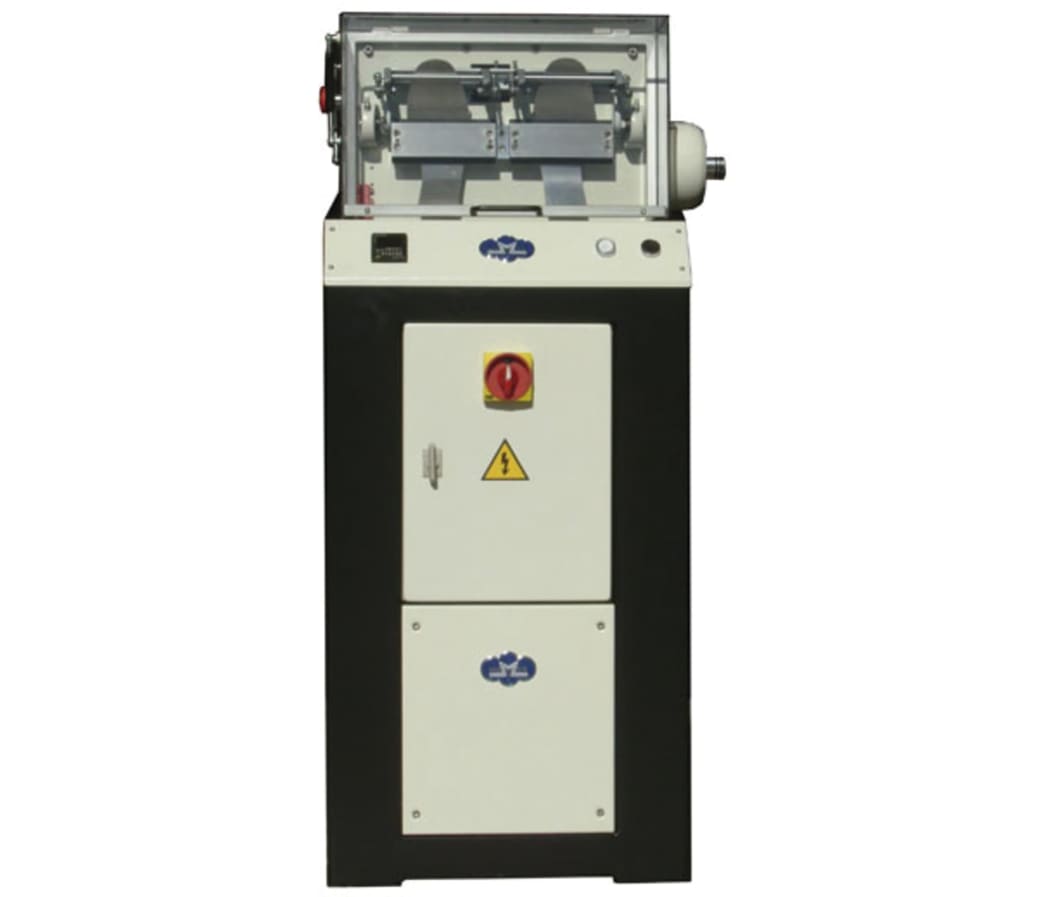 Determination of the flex resistance of penetration-resistant inserts

The behaviour under flexion of the anti-puncture insert is determined visually, after 106 flexion cycles at a frequency of 16 cycles/s. The equipment is shown on Figure 5.

The electrical resistance is determined by transferring a direct current at a voltage defined through the shoe or boot. 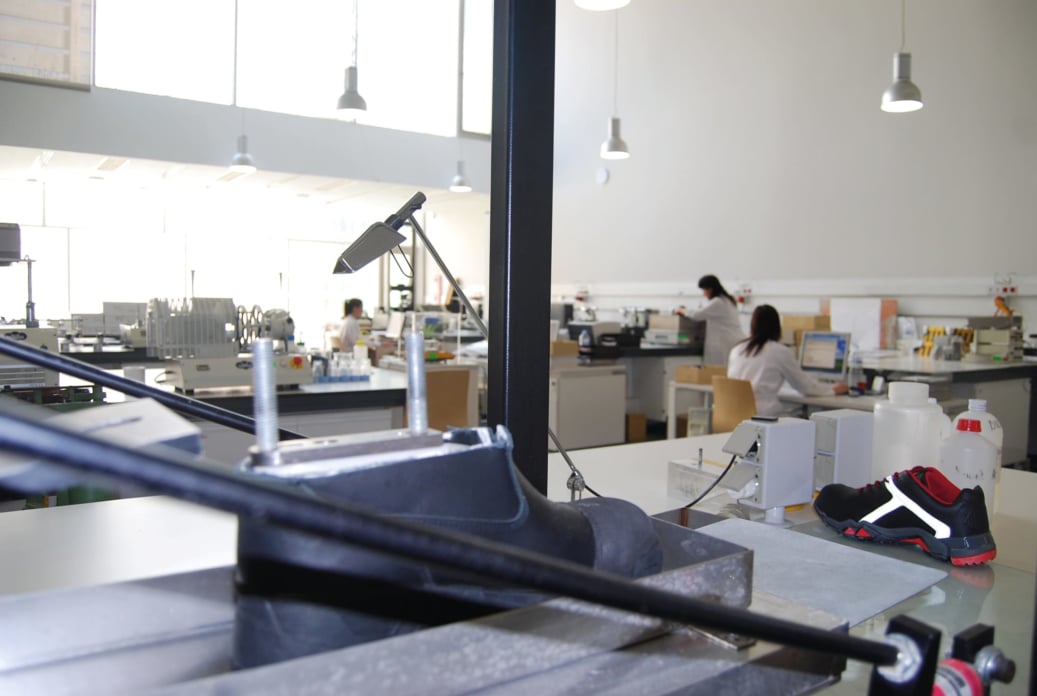 The simple test is located on the test surface (see Figure 6), with a specific vertical load. The surface moves and the horizontal friction strength is measured, calculating the dynamic coefficient of friction (CoF), dividing the value of the friction strength by the normal force. 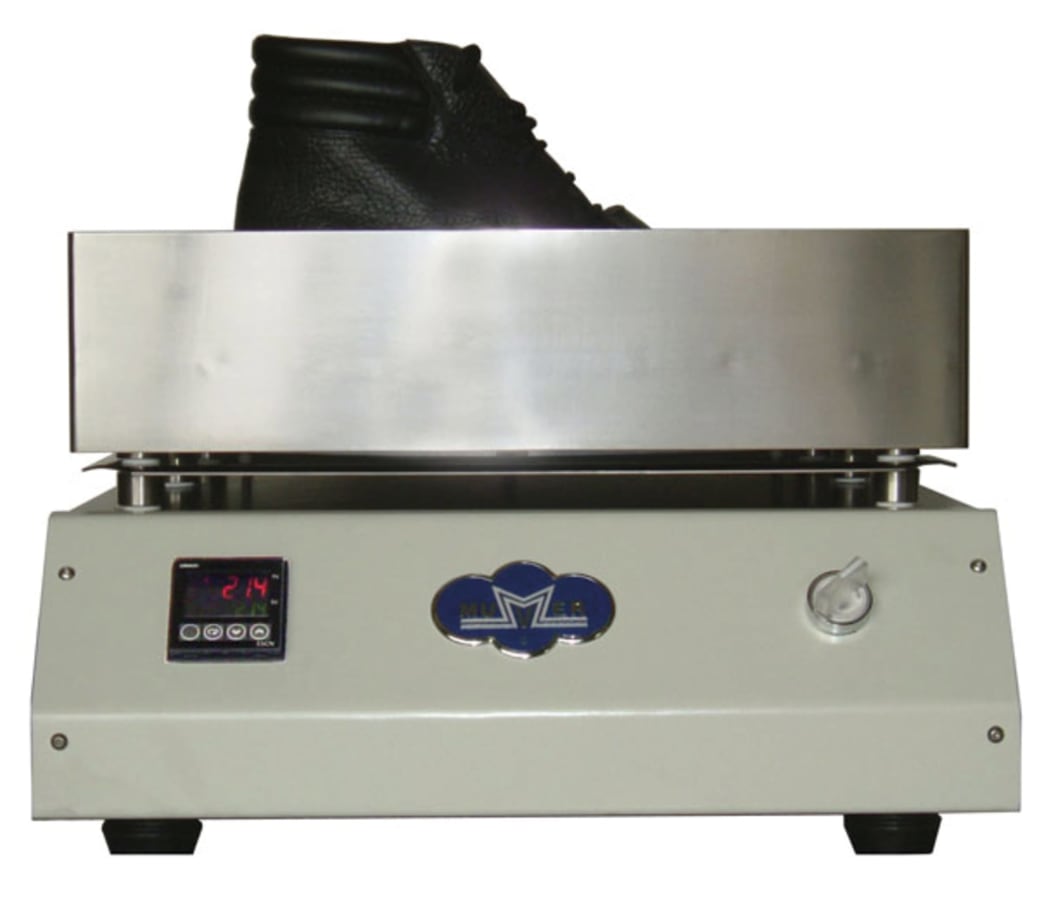 Determination of insulation against heat

This test determines the variation of the temperature inside the footwear after a temperature increase within a sand bath, as shown in Figure 7.

Figure 7: Equipment to determine the resistance against heat 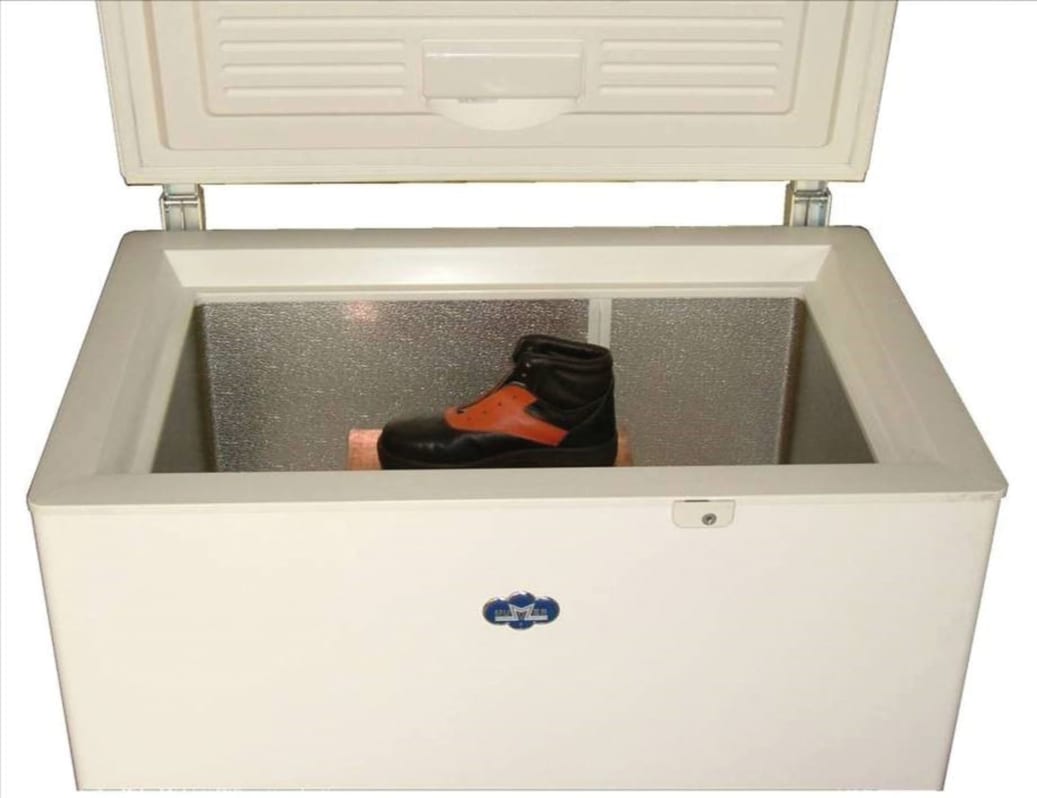 Determination of insulation against cold

This test determines the variation of the temperature inside the shoe after leaving it for 30 minutes in a refrigerator at a temperature of -17ºC, as shown in Figure 8.

Figure 8: Equipment to determine the resistance against cold 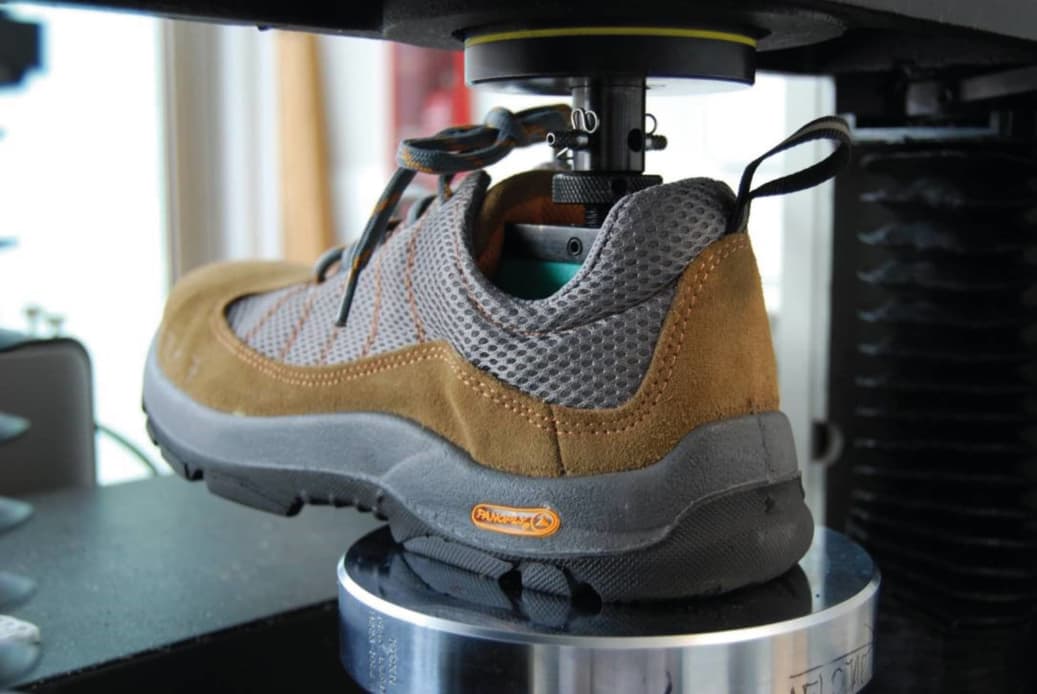 Determination of energy absorption of the seat region

This test determines the energy absorbed by the heel area when a force of 5000 N is applied with the rear part of a last. For that, it uses a dynamometer, as shown in Figure 9.

Figure 9: Test to determine the energy absorption of the seat region 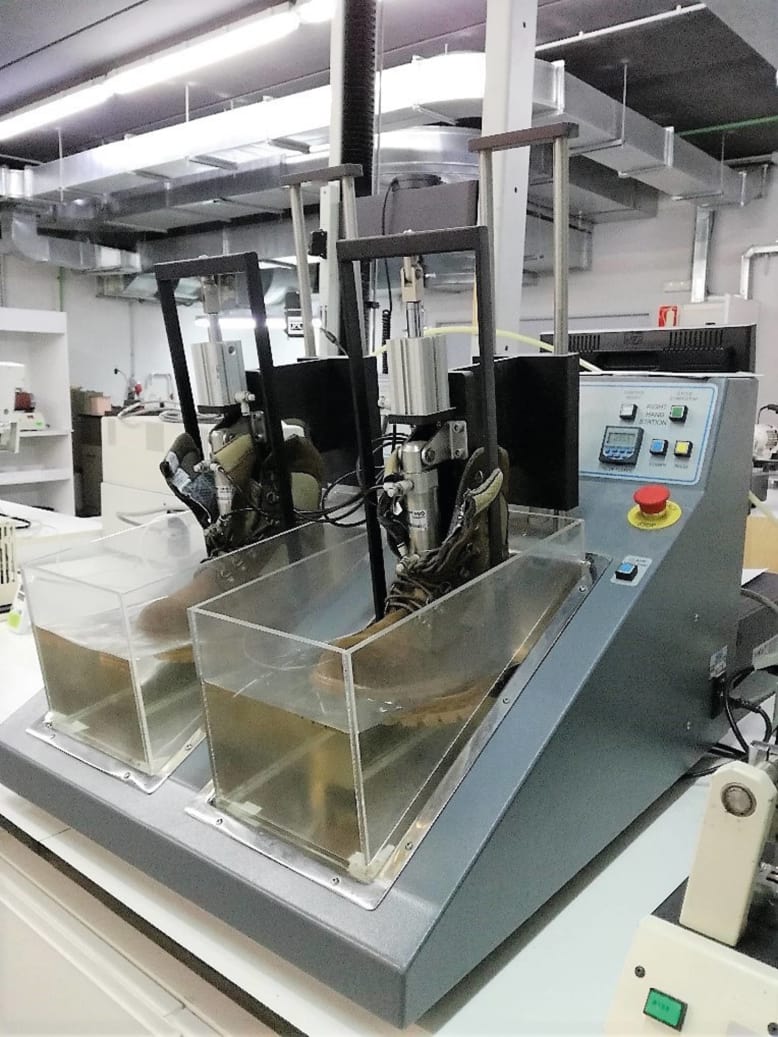 Determination of the resistance to water for whole footwear

The objective of this method is to offer a way to assess the resistance to water for footwear. The footwear is secured in a flexion machine with water, such as the one shown in Figure 10, until a height defined over the line of the bond upper-outsole. To conduct this test, the footwear is flexed at a constant speed and the penetration of water is reviewed at intervals.

Figure 10: Equipment to determine the resistance to water 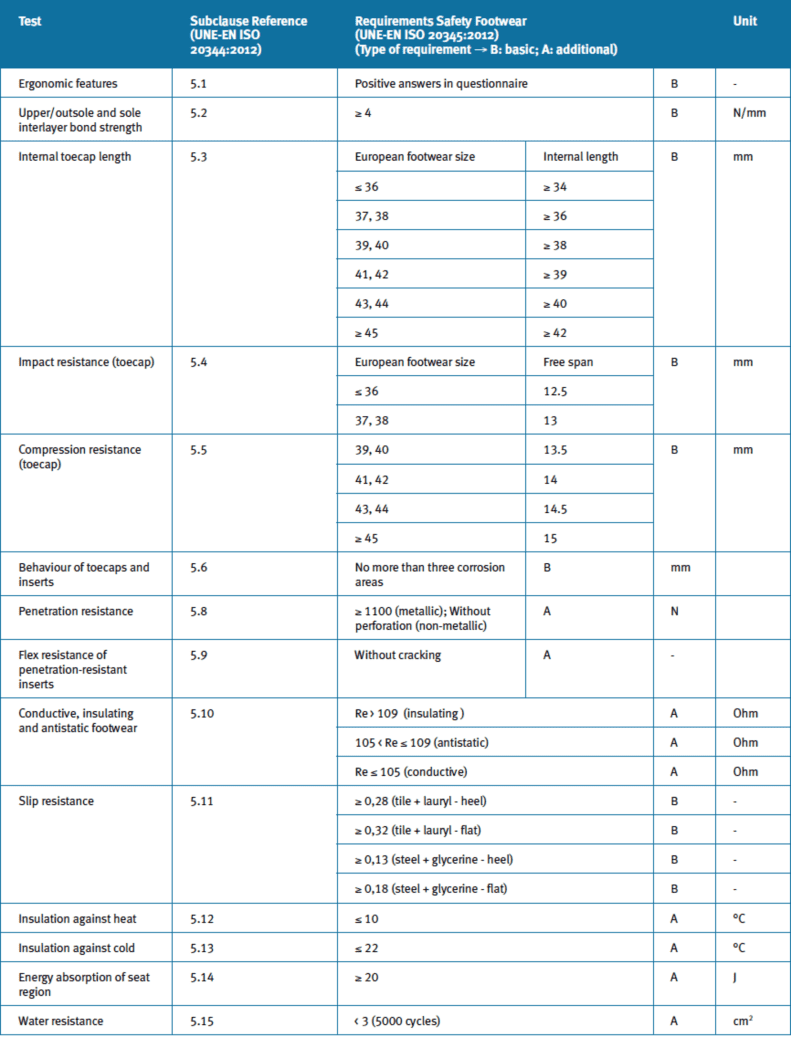 Marta Calvo holds a degree in chemistry with her specialisation in rubber and plastics. Marta Calvo also holds a degree in Occupational Risk Prevention and a Master in Integrated Management Systems. Moreover, she has extensive professional experience in the area of quality control in companies and, of course, managing the physical and chemical laboratories of the CTCR and participating in numerous R&D&I projects on the development of new materials. 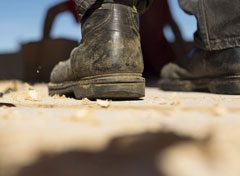